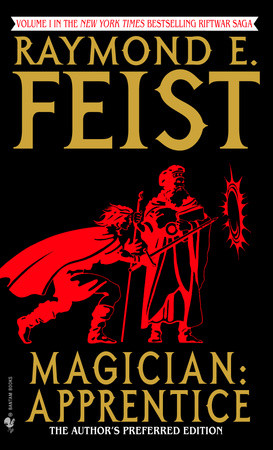 I am kicking myself for not reading this novel when published, my only excuse being I was a teenager with no funds and no connections (remember the state of the Internet in 1982?). I lived twenty miles away from the nearest library back then. If my mom didn’t own the book, I didn’t get to read it.

This story overflows with likable characters: Pug, Tomas, Carline, Roland, Arutha, Kulgan, Meecham, just to name a few. The pacing skips, trots, canters, gallops, crashes, walks, jumps, and flies. The magic system teases you through Pug’s apprenticeship, yet we glimpse broader examples through Kulgan and the invaders. The classic fantasy races make an appearance via elves (both light and dark or good and bad as you prefer), dwarfs, goblins, trolls and dragons.

The world building interwove seamlessly with the narrative as we followed along with Pug and Tomas as they ventured along with the Duke’s expedition to seek aid to stave off an invasion of aliens from his royal kin over the mountains and east of his far western holding of Crydee. The aliens control rifts between their world, Kellewan, and Midkemia, where the Kingdom reigns through the Duke’s royal relatives. Through these rifts, the aliens establish a bridgehead and proceed to slowly encroach upon Midkemia, first to mine metals in the mountains east of Crydee, and then to expand westward to gain access to the sea.

The book ends abruptly, but understandably so, since the original publication was one large volume, not the two we see today published as Magician: Apprentice and Magician: Master. I look forward to reading the second half of this opening salvo in the Riftwar Saga next month.