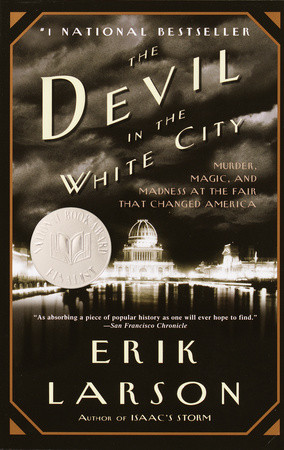 The Devil In The White City: Murder, Magic, And Madness At The Fair That Changed America by Erik Larson

I wanted to give this four stars, and I leaned heavily toward a 3.5 star rating, but ultimately, I settled for three stars. I liked it, but I did not love it. Bright gems gleamed amid the offal, but not enough of them to dazzle my mind’s eye with the gleam of the White City.

I enjoyed the writing style of Erik Larson, which made it easier for me to read a non-fiction book. Granted, I do enjoy a well written history, but Larson included elements common to a mystery or crime fiction novel that kept me turning pages. That being said, however, the two halves of this book (the history of the Worlds Colombian Exhibition of 1893 and the escapades of Dr. H.H. Holmes (and his many aliases)) interspersed with seemingly irrelevant trivia did not a cohesive whole make. And even though I found some of the trivial excerpts jarring, they nonetheless touched me to the quick. Two or three examples come readily to mind:

Chance encounters led to magic. Frank Haven Hall, superintendent of the Illinois Institution of the Blind, unveiled a new device that made plates for printing books in Braille. Previously Hall had invented a machine capable of typing in Braille, the Hall Braille Writer, which he never patented because he felt profit should not sully the cause of serving the blind. As he stood by his newest machine, a blind girl and her escort approached him. Upon learning that Hall was the man who had invented the typewriter she used so often, the girl put her arms around his neck and gave him a huge hug and kiss. Forever afterward, whenever Hall told this story of how he met Helen Keller, tears would fill his eyes. (p. 285)

(Buffalo Bill) Cody upstaged the fair again in July, when exposition officials rejected a request from Mayor Carter Harrison that the fair dedicate one day to the poor children of Chicago and admit them at no charge. The directors that this was too much to ask, given their struggle to boost the rate of paid admission. Every ticket, even half-price children’s tickets, matter. Buffalo Bill promptly declared Waif’s Day at the Wild West and offered any kid in Chicago a free train ticket, free admission to the show and free access to the whole Wild West encampment, plus all the candy and ice cream the children could eat. Fifteen thousand showed up. Buffalo Bill’s Wild West may indeed have been an ‘incongruity,’ as the directors had declared in rejecting his request for a concession within Jackson Park, but the citizens of Chicago had fallen in love. (p. 251)

No one saw Twain. He came to Chicago to see the fair but got sick and spent eleven days in his hotel room, then left without ever seeing the White City. Of all people. (p. 285)

Another passage (pp. 285-286) recounted a passing of the torch from the pioneers of the west (in the person of Buffalo Bill Cody) and those of the future (in the person of Susan B. Anthony). This encounter, on a Sunday morning at his Wild West Show, “brought the audience to its feet in a thunder of applause and cheers. The frontier may indeed have closed at last, … but for that moment it stood there glittering in the sun like the track of a spent tear.”

I did not find the relation of Holmes’ psychopathic serial killings overly horrifying (and what does that say about me and/or our times?). But neither did I feel compelled to ferret out his motivations or worry whether justice would be served. Larson had to take some artistic license in recreating some of the murders, but nothing modern journalists or other ‘true crime’ authors haven’t done as well. Perhaps the suspense became ‘suspended’ for me since many of the quotes from Holmes referred to his Confession, which implies his capture, conviction and sentence execution.

I finished reading this book a bare two hours before attending the Common Grounds Book Group discussion sponsored by the Kansas City Public Library and featured in the Winter 2012 Adult Reading Program “Destination: Anywhere.” Librarian Katie Stover hosted the discussion in a corner of the Nine Muses Cafe’ at the Central branch. About ten of us (nine women and one brave young man named Alberto) joined in the discussion. The following are some of the questions and answers we tossed on the table among the tea and coffee.

Why is this such a popular book? A look at the behind-the-scenes of this Exhibition and how it came about on such a tight schedule (less than two years) and overcame calamities and catastrophes. Larson’s detailed research made you feel as if you were there, present, at the events occurring in Chicago in the 1890s. He accomplished this without the use of any dialog (beyond quotes from diaries and journals).

Why write these two stories together? And do you believe Holmes committed two hundred murders? Holmes creating his personal ‘deathatorium’ by designing and building his mansion and keeping everyone, including the construction workers, from realizing his real plans.

What happened to his first wife and child? In this respect, the author left us in the dark, never circling back to tie up those loose ends. Perhaps, no record existed to relate their fate.

Why did Holmes do it? Did he believe himself evil? Was he compelled by some physiological imbalance? Holmes was ambitious and driven (contrastingly, so was the lead architect for the White City, Burnham). Yet Holmes held no remorse for his action. He knew he was doing wrong, otherwise why would he have gone to such lengths to cover his tracks and conceal or destroy evidence? We all agreed that being a devil reflected a figure of speech, not a true personification of evil, because if you don’t believe in God, how can you truly believe in the Devil?

We moved on to lighter topics, pondering the ‘cool’ things that were introduced at the Exhibition (some of which still exist today), including: A Ferris wheel, hot dogs, shredded wheat, Cracker Jacks, alternating current electricity, inspiration for Walt Disney’s Magic Kingdom (his father was one of the carpenters who built the White City).

I mentioned the research I planned to do based on a couple of sentences found on p. 29: “Three years later a hotel they (Burnham and Root) had designed in Kansas City collapsed during construction, injuring several men and killing one. Burnham was heartbroken. The city convened a coroner’s inquest, which focused its attention on the building’s design. For the first time in his career, Burnham found himself facing public attack.” Again, Larson did not return to this tidbit, so I shall see what I can dredge up from microfiche or microfilm on the Third Floor of the Central branch.

Someone else read a passage the summed up the wonder of the White City (from p. 254):

For many visitors these nightly illuminations were their first encounter with electricity. Hilda Satt, a girl newly arrived from Poland, went to the fair with her father. ‘As the light was fading in the sky, millions of lights were suddenly flashed on, all at one time,’ she recalled years later. ‘Having seen nothing but kerosene lamps for illumination, this was like getting a sudden vision of Heaven.’ Her father told her the lights were activated by electrical switches. ‘Without matches?’ she asked.

Another person contrasted this divine vision, with the irony of boys chasing excitedly after the train carrying Krupp’s gun, which in but a few years would be used to kill them as war erupted across Europe.

Our discussion wrapped up by musing about how easily Holmes faded from one alias to another, how he avoided his creditors and mesmerized women by the dozens. We wondered why only an uncle of one of his wives (some of which he was married to concurrently) saw through Holmes’ beguiling veil to the heart of his dastardly deeds.

2 thoughts on “Book Review: The Devil in the White City by Larson (3.5 Stars)”