This is a shout-out to my hubby, Terry, who has worked tirelessly for months (nearly a year) to remodel our main bathroom.  We saw the light at the end of the tunnel last week with the arrival of the final piece in the puzzle: 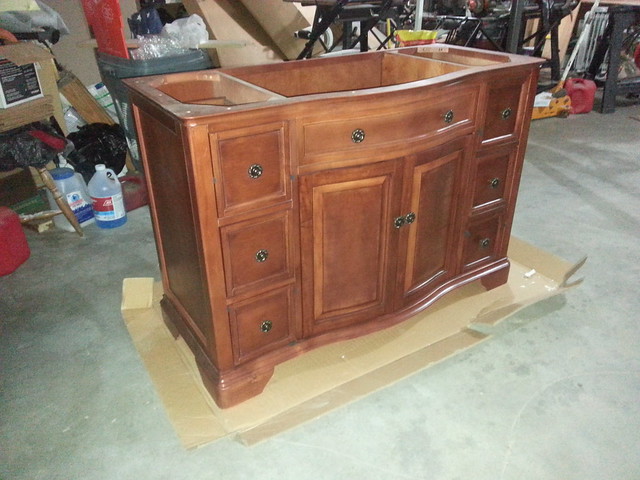 This new vanity, the second one ordered after the first one was returned because of defects, weighs close to or over two hundred pounds, without the granite top. END_OF_DOCUMENT_TOKEN_TO_BE_REPLACED

I laughed but I almost cried as well.   This is so true.  I can’t claim to be neat and organized as Modesitt does (except digitally) but I can confirm that remodeling your house while you are living in it is a challenge.

Here’s just one small example of what I’ve been living with for about ten months now.  This is the family room, formerly known as the ‘band’ room (for about ten years), being transformed into our new entertainment home theatre room:

Yes, our ‘stuff’ included moving a piano. Now here’s the ‘after’ video that starts in the finished family room and tours some of the other remodeling we’ve done:

We are oh so close to a milestone in our home improvement project(s).  We are ordering the vanity and mirror for the bathroom this week.

I can’t wait to have my main bathroom fully functional again after so many months.

The great escape (or is that escapade) began this week, auspiciously on Monday, August 1, 2011.  Our home remodeling project kicked off (finally) when the roofers arrived to strip off our old roof and replace it with a new one.  We waited in the roofing queue for several weeks, while the roofers kept busy basking in the balmy sunshine of the prairie cauldron that culminated in record temperatures Monday and Tuesday of this week.

But first, a stroll down memory lane, with a couple of cool before photos:

If you look past my daughter (and the ugly Ford pickup) you can see the six year old roof (new in 1997).

Snow covered the roof (for most of January and February this year), but at least this is a ‘cool’ picture. And I’ll duplicate these photos tonight or Saturday (when I have favorable light from the east):

But back to the project of the week:  Stripping off the old roof (click on the photo below to see the rest of the album)

And by sunset of the first day, the roofers reached the halfway point (click on the photo below to view the rest of the album):

And by the time I returned home from work Tuesday evening, I saw a completed roof and all traces of the old roof (and the roofers) gone.  Terry managed to convince the crew to adopt Rachelle’s old bicycle, which escaped our earlier spring cleaning dump run a couple of months ago.

Next step in the renovation:  Driveway replacement

So remind me to get the Firebird out of the garage before the crew tears out the old concrete.  Terry promised he would call the contractor today.