For once, I live in just about the best spot to observe a total solar eclipse. The center line for the eclipse coming in August 2017 is just a few miles north of where I live.  That being said, the path of the eclipse cuts diagonally across the United States from Oregon to South Carolina.

Update Monday 9/1/2014:  I forgot to include a link to the Astronomy magazine article that will take you to the interactive map shown above:  Make Plans for the 2017 Eclipse with This Great Map. END_OF_DOCUMENT_TOKEN_TO_BE_REPLACED

I spied a wonderful ‘postcard’ from Varages in southeastern France via the Astronomy Sketch of the Day this morning: 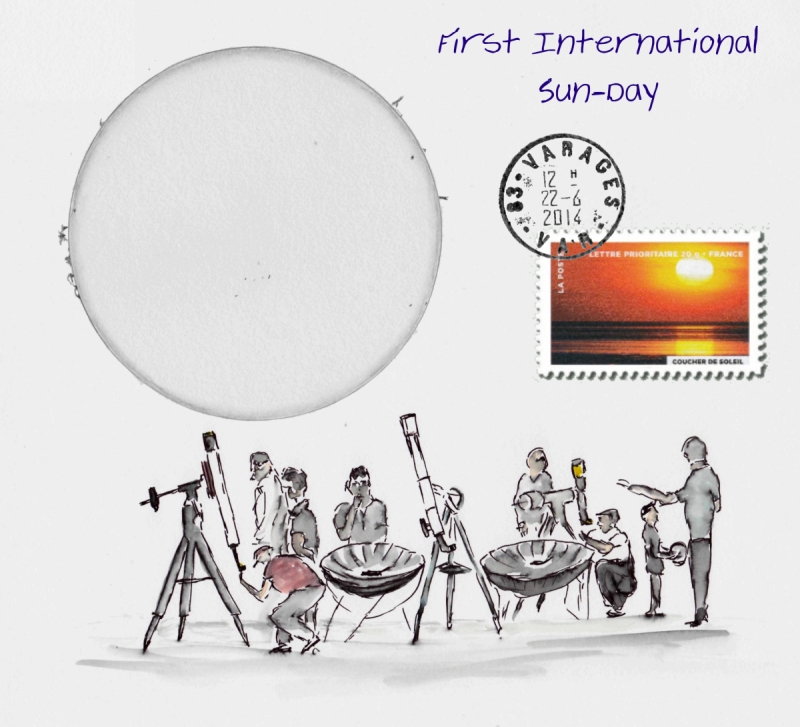 I especially like the foreground sketches. The sun was ‘quiet’ on Sunday.

Right about now I’m regretting the decision to return the Dob back to the club. It was great for solar observing.

The Weakest Solar Cycle in 100 Years

Just before one o’clock, I took a break from prepping the purple bedroom for ceiling painting and went down to the lower patio to try some solar observing with the XT8.  The telescope was still in the shade (barely) but could be tilted into the sunlight out of the shadow of the house.  This created the ideal observing site, for me at least, as I could stand mostly in the shade and still use the scope to observe the sun.

I removed the dust caps and installed the solar filter on the end of the tube.  I selected a 28mm eyepiece, which would show me the entire solar disk.  I looked down the tube to the ground and used the silhouette of the scope to orient on the sun (the smaller the shadow, the better aligned).  Bingo!  Found our closest stellar neighbor on the first try.

I could clearly see six sunspots.  I tried the 15mm and the 9mm, but became disappointed in my inability to achieve a crystal clear focus when I zoomed into one of the sunspots.  I nudged Terry away from his computer in the band room to see what he thought of the various eyepieces and how well they focused on the sunspots.  He seemed to have the same experience I did.  The 28mm provided the best and crispest view.

After a few minutes out in the heat, I decided enough was enough and brought the telescope back into the house, carefully putting away the solar filter in its protective cover and box.

My dad and I ventured out Saturday night to attend the April 2011 general meeting of the Astronomical Society of Kansas City, held on the fourth Saturday of nearly every month at Royal Hall on the campus of UMKC.  Dad volunteered to drive from Lansing/Leavenworth to just east of the Country Club Plaza in Kansas City, Missouri.  We had a pleasant uneventful drive.

Once we arrived on campus and eventually navigated the one-way streets around Royal Hall to find the entrance to the parking garage, we entered the building and immediately recognized a couple waiting in the hallway outside the lecture room.  We stumbled upon old friends from our amateur radio past.  We spent several minutes getting reacquainted and catching up.  We gravitated towards the lecture hall and sat together.

The first hour of the meeting involved various awards for observing activities, reports on scholarship funding and distributing, status of the DSS (dark sky site), encouragement to try an observing club or activity and brief demonstration of beta testing a recent kit from the NASA‘s Nightsky Network.  There was also a brief commercial for a performance called ‘Orbit‘ by Dark Matter scheduled for the first weekend in May at Union Station‘s Gottlieb Planetarium.

The meat of the meeting came with a presentation on Solar Observing Basics by Neta Apple.  Her talk covered safety, first and foremost, various filters (white light, calcium K and hydrogen alpha – her personal preference).  an introduction to the interior of our closest star, umbrae, penumbrae, light bridges, granulations, prominences, faculae and solar flares.  Neta mentioned a 19th century solar flare, commonly know as the Carrington Event, named for the British amateur astronomer who observed it in 1859.  She asked the audience what we thought the result of a large or super flare of similar magnitude to the Carrington Event would do to our technology heavy civilization?  While we might survive that Russian roulette with the Sun’s gun, we lack the stockpiles of electrical transformers to replace all those that would be destroyed (estimates predict it would take two years for the Mexican manufacturers to create enough to replace just those lost in the United States alone).

On a happier note, Neta wrapped up with some examples from NASA’s Solar and Heliospheric Observatory (SOHO for short) web site and opened the floor for a brief question and answer period.

By this time, we were approaching the latter half of the nine o’clock hour, and the meeting coordinator (the President was absent, so there was a substitute) decided to de-formalize the scheduled town hall meeting to a social gathering, with refreshments, encouraging attendees to meet their board members and  other club regulars.  I took the opportunity to quickly skim through the available observatory activities, grabbing the Astronomical League‘s Urban Observatory Club handout, but forgetting to grab ASKC’s Astro Quest one.

I asked a question of the Membership Secretary and then said goodbye to our old amateur radio friends.  Dad and I returned to the car and drove home, under cloudy skies.  I’m looking forward to ‘opening night‘ at Powell Observatory on Saturday, May 7th, featuring the ‘Galaxies of Spring’ and I hope to see you there!