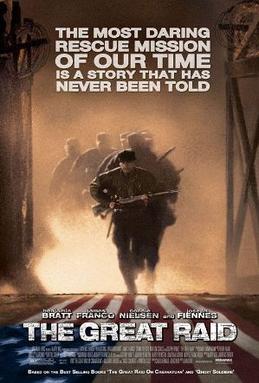 Last weekend, I watched The Great Raid, which I’d somehow missed when it was released twelve years ago in 2005.  This movie retells the story of The Raid at Cabanatuan, a rescue of Allied prisoners of war (POWs) and civilians from a Japanese camp near Cabanatuan City, in the Philippines. On January 30, 1945, during World War II, United States Army Rangers, Alamo Scouts, and Filipino guerrillas liberated more than 500 from the POW camp.

This movie was a segue for me from The Railway Ran , which I watched two years ago and that I mentioned in my recent post on ‘Dropping the Bomb.’

Joseph Fiennes turn in an excellent performance as the tragic Major Gibons, but the real surprise for me was seeing Connie Nielsen as Margaret Utinsky.  I spent half the movie distracted because I could not place her face in my memory.  I gave up and checked IMDB and had that epiphany feeling when I realized she performed as Lucilla in the twisted Roman triangle with Commodus and Maximus five years earlier in Gladiator. 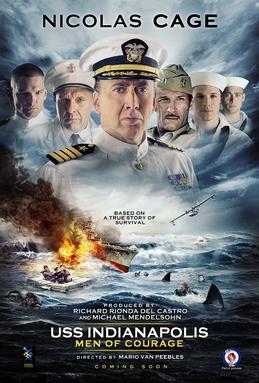 I followed The Great Raid yesterday with a viewing of U.S.S. Indianapolis: Men of Courage.  This film more closely related to my post about ‘Dropping the Bomb’ since “In 1945, the Portland-class heavy cruiser USS Indianapolis, commanded by Captain Charles McVay (Nicolas Cage), delivers parts of the atomic bomb that would later be used to level Hiroshima during the ending of World War II. While patrolling in the Philippine Sea, on July 30 in 1945, the ship is torpedoed and sunk by the Imperial Japanese Navy (IJN) submarine I-58, taking 300 crewmen with it to the bottom of the Philippine Sea, while the rest climb out of the ship and are left stranded at sea for five days without food, water and left in shark-infested waters.” (Wikipedia).

I survived Cage’s stilted acting, with the help of the supporting cast, who performed admirably and believably.  Matt Lantner, whose grandfather, Kenley Lanter, was one of only 317 men to have survived the sinking of the USS Indianapolis.  Matt portrayed Chief Petty Officer Brian “Bama” Smithwick with his usual All American boy-next-door Midwestern heart.  And did I mention he’s also the voice of Anakin in Star Wars: The Clone Wars?

I ended the weekend with the much anticipated and highly acclaimed Hacksaw Ridge, which I’d been hesitant to watch for fear of a too real portrayal of warfare (remember the opening to Saving Private Ryan?).

Hacksaw Ridge is a film “about the World War II experiences of Desmond Doss, an American pacificist combat medic who was a Seventh-day Adventist Christian, refusing to carry or use a firearm or weapons of any kind. Doss became the first conscientious objector to be awarded the Medal of Honor, for service above and beyond the call of duty during the Battle of Okinawa.” (Wikipedia)

Outstanding story, directing and acting.  Truth is so much stranger than fiction and infinitely more inspiring.  “Just one more, Lord” are words to live and die by.  I highly recommend this movie and I’m sorry I waited so long to watch it.

My Brain Upgrade Project continues apace with readings on social and political philosophy.  I wrapped up the chapter with a section on the Limits of the State, which included the following Philosophy and Life insert on p. 595 of my Philosophy textbook: 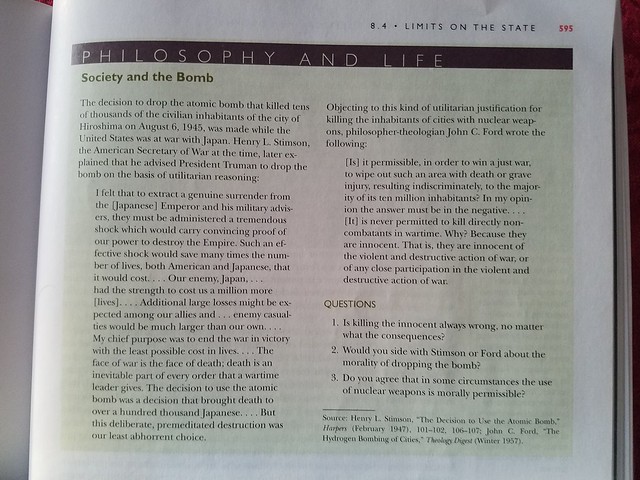 I choked up reading the quote above in the left-hand column attributed to Henry L. Stimson.  END_OF_DOCUMENT_TOKEN_TO_BE_REPLACED