Anything but zombies please! 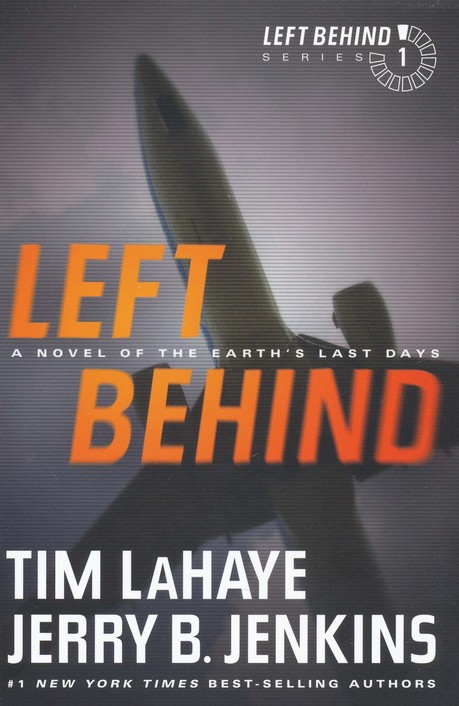 Left Behind by Tim LaHaye and Jerry B. Jenkins

I avoided reading Left Behind for nearly fifteen years, mostly because I avoid anything hyped or overhyped.

Just so you know a bit of history about my faith, I am a believer, a disciple of Christ, or more colloquially a “Christ-follower.” While I still use the term Christian, a pastor recently mentioned in a sermon that the term “Christ-follower” delivers a more accurate message of who and what we should be and the example we should all strive towards.

The point of view filtered through the two central characters in Left Behind – Rayford Steele and Cameron ‘Buck’ Williams – provided an up close and personal view as they experienced being left behind after the Rapture (Jesus returning to Earth and resurrecting all his followers, living, dead and innocent (i.e. the children), bodily to Heaven). Two very different perspectives strive to discover the why and how of the disappearances, to the benefit of the reader.

Rayford loses his wife and son, but not his daughter. Bruce loses his sister-in-law and her children and several co-workers.

Rayford, the self-centered, assured and confident jetliner pilot, grieves bitterly but humbly seeks answers from one of his wife’s former pastors, also humbled and shocked at having been left behind.

Buck, an ace reporter for a large news magazine, finds himself more than neck deep in world-changing people and events, as he investigates the disappearances and gathers theories for a comprehensive cover story. His cynicism protects him from realizing the consequences of denial until nearly the point of no return.

Most of the other characters play supporting roles, often only there to spur on the discourse of prophetic teachings almost literally ripped from the King James Version of the Bible, dripping with red letters.

The only other character of note, of course, is Nicolae Carpathia, the up and coming political powerhouse that promises world peace and ultimately delivers it, on his own terms. As impressive and heart pounding as the culminating conflict in the U.N. conference room was, I would have been more impressed had Nicolae convinced Stonagal to murder Todd-Cothran and kill himself. Nicolae pulling the trigger himself seemed cliche, but then brainwashing everyone present by sheer force of will, except Buck, helped seal his power as the Antichrist.

Comparing the two conversion experiences, I preferred Buck’s last-minute-must-forge-ahead one to Rayford’s poleaxed one. Neither conversion appealed to me, since both were fear driven due to the apocalyptic change wrought on the world. Such a heavy emphasis on prophecy is appropriate for this setting, but hard to stomach as an evangelizing tool towards the reader. At least Rayford read the four Gospels in one sitting before moving on to the “Shock and Awe” of Daniel and Revelation.

I am glad I finally read Left Behind but I won’t be joining the Tribulation Force any time soon.

It’s 1959. It’s the height of the Cold War. The threat of thermonuclear war hangs in the air like an impending thunderstorm.

Randy Bragg is a lawyer living in the backwaters of Florida in the small town of Fort Repose. He’s the younger brother of an Air Force Colonel, Mark Bragg, stationed at Offutt AFB in Omaha – the renowned home of SAC HQ. Mark sends Randy a cryptic telegram telling him his wife and kids were coming to visit and ends with the phrase “Alas, Babylon.” This is a code word they discussed a few months earlier that meant a nuclear strike against the US was imminent.

Randy attempts to stock up for the aftermath, but really doesn’t have a grasp of what will be left after the attack. It’s not like a hurricane where your power and water might be interrupted for a few days or a few weeks. The entire infrastructure of modern life was shattered and disrupted beyond recovery in most large cities. Medical supplies, food, communications, transportation – everything was thrown back one hundred or even two hundred years in a matter of days.

The author did an excellent job of showing how one small town, uniquely spared the nuclear holocaust, managed to not only survive but retain some civilization and hope for the future.

Also, Fort Repose was not far from Cape Canaveral (where NASA is now) and I would have thought there would be more military or engineers (retired or otherwise) living in Fort Repose.

I find it difficult to believe that even a small town would only have one bicycle – the one that belonged to the Western Union office used by the messenger boy. Every child would have had one and I’m sure some of the adults as well. Drive three or five miles on a bicycle in flat Florida wouldn’t have been too arduous.

In hindsight, we now know more concerning the other hazards of nuclear attacks; things like nuclear winter and electromagnetic pulses. Still, I am very impressed, even fifty years later, with Pat Frank’s chilling tale of survival and hope.

A Canticle for Leibowitz by Walter M. Miller Jr.

So many questions to ponder, presented through Miller’s monastic brothers preserving the last scraps of our civilization and an undying Jewish hermit (assumedly the Wandering Jew of legend) searching for Him who said ‘Come forth!’ Never once did I feel preached at, so skillful was Miller’s presentation.

Even though the Cold War is over, and mutually assured destruction no longer so assured, A Canticle for Leibowtiz posits convincingly that ‘those who ignore history are doomed to repeat it.’