The Sword of Michael by Marcus Wynne

Marius Winter doesn’t walk the road of the shaman-warrior alone. He has powerful allies in the Other Realms and in ordinary reality. His spirit guides are a Lakota war-chief and medicine man, First In Front; Tigre, a powerful feminine spirit who appears as a white tiger; and Burt, a spirit raven who channels an old Jewish bookie from the Bronx.

Now Marius is targeted by a powerful sorcerer. In the battle for the souls of his friends and lover, he must storm the gates of the underworld and fight through the Seven Demi-Demons of Hell to the deepest dungeons to confront Belial himself.

I found myself skimming and skipping most of this book.  The first two-thirds seemed your standard urban fantasy with a supernatural flare, demons and angels, the old Holy War, tied into or growing out of the Fall of Atlantis.  The dialogue was forced and re-used one-liner clichés poorly.  After about the sixth time I’d read a ‘one-liner’ I just about gave up.  I forged on, but the ‘pay off’ didn’t pay as much as just felt off.

END_OF_DOCUMENT_TOKEN_TO_BE_REPLACED

What a wonderful book to wrap up the Halloween season!

Ana is a 17th century vampire from Transylvania, transplanted to eastern Iowa by the strangest and saddest of circumstances. She is hunted by a zealous priest who paralyzes her with his crucifix and drives a wooden stake through her heart. Fast forward 300+ years to an automobile accident involving an armored car that was transporting her remains to a museum exhibit. The accident dislodges the stake and Ana find herself restored to a fiery confusion, which she escapes in her bat form.

END_OF_DOCUMENT_TOKEN_TO_BE_REPLACED

Provence, in the south of France, is a part of the world that has been—and continues to be—called a paradise. But one of the lessons that history teaches is that paradise is coveted and fought over. Successive waves of invaders have claimed—or tried to claim—those vineyards, rivers, olive groves, and hills.

In Guy Gavriel Kay’s novel, Ysabel, this duality—of exquisite beauty and violent history—is explored in a work that marks a departure from Kay’s historical fantasies set in various analogues of the past.

END_OF_DOCUMENT_TOKEN_TO_BE_REPLACED 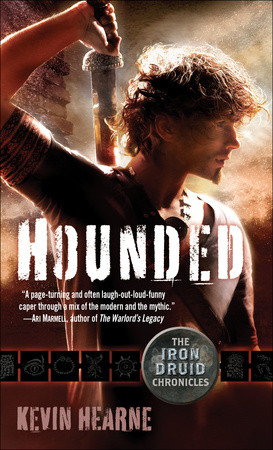 This type of urban fantasy could easily grow on me. Absolutely no zombies and only one token cameo vampire. I didn’t mind the pack of werewolves.

All the rest of the ‘paranormals’ hailed from Celtic mythology. Oberon the Irish wolfhound got the best lines, often at the expense of our hero, the Iron Druid.

END_OF_DOCUMENT_TOKEN_TO_BE_REPLACED

The Rook by Daniel O’Malley

I listened to this book because it was the July 2013 book of the month for the Fantasy Book Club.

Parts of this book were laugh-out-loud funny, but other parts of it just set my teeth on edge. Too many infodumps and a bit too much profanity.

END_OF_DOCUMENT_TOKEN_TO_BE_REPLACED

The Eyre Affair by Jasper Fforde

A wonderful thing happened on the way to The Eyre Affair; I read Jane Eyre.  For that alone I will be eternally grateful.

Otherwise, it was an enjoyable but forgettable mystery set in a chaotic vortex of genres spanning paranormal, science fiction, alternate history, and time travel.  At one point, it even reminded me of Butcher’s Dresden series.

The puns, literary references and alternate history gaffs intrigued me and sparked quick forays of research to confirm or deny my suspicions.

I have the sequel Lost in a Good Book waiting in the wings to see what happens Next.

The Mystery of Grace by Charles de Lint

I enjoyed this short novel, but found it hard to categorize since it crossed so many subgenres. Ghost, spirits or spiritwalkers, a smidgen of Native American shamanism, a pinch of paganism (Wiccans at the Witches’ Ball no less), Catholic saints, a peculiar Purgatory, existentialism, a dangerous delusional mother and a surprising touch of redemption wrapped in tattoos. Oh, and a brief romance kindled after the protagonist’s death. Trust me, it sounds strange (it is strange), but de Lint delivers.

Harry Dresden is a wizard P.I. with more trouble than you can shake a wand at and a sarcastic wit to die for – literally.

A fun quick read through a nearly contemporary Chicago where sorcery and demons roil just under the civilized veneer.

I would have given this four stars, or at least three and a half, except for the first person point of view. It’s such a limiting perspective in my opinion, where I must rely on the narrator’s information and thoughts for the entire length of the novel.

And I had the entire ‘mystery’ figured out by the time he first met Monica at his office.