I’ve reached the point of hknow return in this third week of a five week course on Out of the Silent Planet led by Corey Olsen through the Mythgard Academy arm of Signum University. Please parden my use of a hnot-so-silent “H” throughout this post in honor of Lewis foray into the philological hrealm usually hrelegated to his fellow Inkling Tolkien. For my hnotes from week one and week two, please click on the appropriate week to return to those posts.

I had hoped to publish this Thursday night, but the video for this week’s class has not yet been uploaded to Signum University’s Youtube channel. So I will hold off on publication until Friday evening or Saturday morning.

A tweet from @Mythgardian earlier this morning woke me up (at 3:58 am Central) but I was happy to see the video for session three had finally been posted. Now I can finally publish this post!

This is one of his two favorite bits of this book – Meeting the Hrossa.  We are going to try to go from his first meeting of this whole interlude all the way to the parting from the Hrossa. 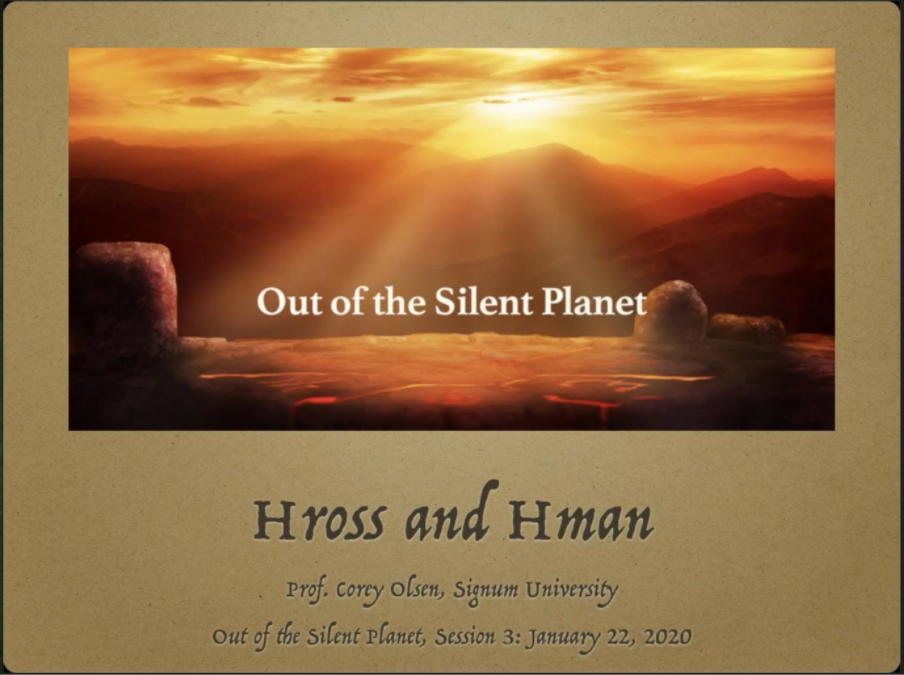 MootCast is being done again this year for MythMoot.  Live access to any session you want to be in; you get recordings for everything; a wonderful way to participate and watch even if you can’t make it.

END_OF_DOCUMENT_TOKEN_TO_BE_REPLACED

I meant to post my notes from last Wednesday’s second week of the Out of the Silent Planet class but work life got very hectic and then I spent most of my last three day weekend until Memorial Day playing Aardwolf. I will do better this week, I promise – notes posted by end of week at the latest.

And I discovered a feature of GoToWebinar too late, at the end of the second session, that allows me to save the current slide as an image. Going forward, I’ll capture each slide so my notes make more sense to myself and others. Of course, I always include a link to the video of the session that’s published within a day or two by Signum University (see link above or click here).

Spring Semester started at Signum U.

END_OF_DOCUMENT_TOKEN_TO_BE_REPLACED

How I spent the first winter storm weekend of January 2020.

Until Friday, this January has had the weirdest warm weather I’ve ever experienced in northeastern Kansas. Usually, I’m bundling up because the temperatures outside are nudging into single digits or a raging snowstorm with a wicked north wind blows through to remind us of what our Canadian neighbors endure daily. I actually looked forward to a three-day cold snap with a soft blanketing of snow. My pantry was stocked and I could wait to shovel the driveway until Sunday afternoon (which I did). I avoided the ice forgotten under the snow from Friday’s all-day rain. I stayed snug in my home with my sourdough, my movies, my books, my dog and my hubby.

Just like last weekend, I set out my sourdough starter to feed, but this time I did it Friday morning, not Saturday morning, because my plan was to try the much longer process necessary for the Extra Tangy Sourdough bread recipe. I thought I’d take advantage of the low pressure system to boost my wild yeast production. And I wanted to try out my new covered ceramic baker I received on Friday, thanks to a free shipping promotion last week at King Arthur Flour.

END_OF_DOCUMENT_TOKEN_TO_BE_REPLACED

My notes from first session of Mythgard Academy webinar discussion on Out of the Silent Planet by C.S. Lewis.

I spent a couple of hours past my usual bedtime last Wednesday evening with Corey Olsen and three dozen new friends discussing the first five chapters of Out of the Silent Planet by C.S. Lewis. I’m proud of myself for making it to the end of the discussion, which ended at 11:15 p.m. I’ve probably read the first book of the Space Trilogy a half dozen times since I first discovered it in the 70s as a pre-teen. I’ve never had an opportunity to do a serious in-depth reading and discussion so I am very excited about the opportunity presented by Mythgard Academy and a generous donation of a patron thereof.

While I participated live in the GoToWebinar session, where I could interact with Corey Olsen via chat, you can watch to the session via the Signum University Youtube channel (link to the playlist) or listen via podcast. Old habits die hard; even knowing the session was being recorded, I took transcript-like notes (because I can still type over a hundred words per minute and can easily keep up with a single person lecturing).

What follows are my notes from Wednesday’s first webinar on Out of the Silent Planet.

END_OF_DOCUMENT_TOKEN_TO_BE_REPLACED

Out of the Silent Planet

Nearly six years ago I re-read Out of the Silent Planet for the 1939 Retro Hugo Awards. I gave it my top slot vote for the Best Novel category, followed by Galactic Patrol and T.H. White’s The Sword in the Stone. I was a bit disappointed when Lewis came in second to the White, but you can’t win them all.

I originally read the Space Trilogy in my early teens and those paperbacks are long gone. Over the years, I’ve picked up copies from used books stores, garage sales and Friends of the Library annual book sales. This past weekend, I remembered I’d registered for the class when it was first announced weeks ago and went searching for all my editions: print, electronic and audio. I quickly found two nearly pristine in very good condition and apparently unread paperbacks buried in my brimming bookshelves.

END_OF_DOCUMENT_TOKEN_TO_BE_REPLACED

The oven timer pinged before I finished writing my second phase post yesterday afternoon. I had hovered over the publish button many times, but kept finding things to fix and change. Once I heard the timer beep, I had to save a draft and retrieve the first loaf from the oven.

I’m happy but not completely satisfied with the first loaf results. I think I should have let it rise before shaping it. And I think I need a new lame. My slashes were not deep enough so the loaf did not expand as well as it could have with properly deep slashes. The loaf passed the taste test.

END_OF_DOCUMENT_TOKEN_TO_BE_REPLACED

Welcome back! I’ve just popped the first sourdough loaf in the oven and in a few minutes my house, at least the main level, will smell amazing. And as my uncle commented on my fist post, he’s already salivating and soon I will be joining him. Nothing smells better than baking bread . But first, let’s back track about ninety minutes and catch up.

The Second Act ~ The Not-So-Meaty Middle

About an hour after I published my previous post, I pulled the dough out of the bread machine, gently kneaded it by folding the very sticky dough in upon itself from the four corners (of a ball, yeah, I know, doesn’t make much sense and is difficult to make a video while actually performing the action). I sprayed my glass stove-top with cooking spray and coated my my hands as well. I’ve learned from experience that the easiest way to handle high hydration doughs is to grease yourself and your surface to avoid getting stuck.

END_OF_DOCUMENT_TOKEN_TO_BE_REPLACED

Today is the twelfth day of Christmas and it’s been eight days since my daughter gifted her sourdough starter to me when she returned to Seattle. I fed the starter late last weekend and set it out from the fridge yesterday morning to warm up to room temperature so I could feed it again in anticipation of baking sourdough bread today. Very early this morning, I checked the started to see how ripe (or vigorous) it appeared and it was quite bubbly. So instead of feeding it again (to enhance its vitality), I reviewed the Basic Sourdough Bread recipe at King Arthur Flour that I had decided to try today to see what to do to prep starter to use in an actual bread recipe.

The recipe required two cups of starter so I put eight ounces of water and eight ounces of all-purpose flour in my small mixing bowl (see first photo above). To this I took all but a half cup of the starter from the crock and stirred vigorously. I covered the small mixing bowl with my tea towel and then re-fed my starter as I would normally – half cup of water and a cup of all-purpose flour.