END_OF_DOCUMENT_TOKEN_TO_BE_REPLACED

I’m a bit stunned to find myself already facing February. Where did my January disappear to? So many reading ambitions and so few goals achieved. I find myself five books behind my pace to reach my annual goal of ninety-six books (eight books per months). Basically, I finished three books last month. Not that I wasn’t constantly reading something (I’ll discuss my overflowing currently reading dilemma in a bit).

Here’s the three I actually started and finished during January:

The first book I started and finished during the first week of the new year was Dickens’ Hard Times. This was the winter reading classic selection for my local library adult book club. We meet on the second Thursday and have lively discussions, including about this shortest and last published work of Charles Dickens.

I listened to the audiobook read by Simon Prebble and managed to complete it with just thirty minutes to spare before arriving at the library for the discussion. We were split as a group whether we liked this book. It is not your typical Dickens and had some portions that were a bit of a slog to muddle through. In hindsight, we all agreed we should have read Little Women in light of the release of yet another movie adaptation over the holiday break. We decided that next winter we will allow ourselves the luxury of reading a classic that might be adapted and released during Thanksgiving or Christmas holidays.

END_OF_DOCUMENT_TOKEN_TO_BE_REPLACED

Last week, I finished listening to or reading the rest of the short fiction I had earmarked for perusal before end of year in a previous post. I’m very grateful to the podcasts of various SFF magazines that fit perfectly into my daily commute. Many of the authors below are new to me. Only Aliette de Bodard, KJ Parker and Sarah Pinsker have I read previously.

December 16th I listened to “Portrait of the Artist” by KJ Parker (3.5-4 stars) published in a special double-issue of Beneath Ceaseless Skies. After dinner I read “The Imaginary Palace of the Winter King” by Sarah Tolmie (3.5-4 stars) from the February 2019 edition of Strange Horizons. “Winter King” was also available via a podcast but I felt like reading the ebook edition I receive as a Patreon of that magazine.

END_OF_DOCUMENT_TOKEN_TO_BE_REPLACED

I have twenty-four days left to read twenty-five books to reach my goal of reading one hundred and one books this year. I’m skeptical I’ll complete my self-imposed challenge.

I can possible finish another ten books, but I doubt I can do at least a book a day, not and work, clean, shop, etc. This will be the first time ever I won’t meet my reading challenge. I fudged a couple of years ago and lowered my challenge 2/3 or 3/4 of the way through the year due to work, school and home pressures. But this year I’m resisting the urge to adjust my goal post just to give myself a ‘fake’ win. I will suffer the shameful consequences.

END_OF_DOCUMENT_TOKEN_TO_BE_REPLACED

Killers of the Flower Moon

The Osage Murders and the Birth of the FBI

Read by Ann Marie Lee, Will Patton, and Danny Campbell

In the 1920s, the richest people per capita in the world were members of the Osage Indian Nation in Oklahoma. After oil was discovered beneath their land, the Osage rode in chauffeured automobiles, built mansions, and sent their children to study in Europe. Then, one by one, they began to be killed off. And it was just the beginning, as more Osage began to die under mysterious circumstances.

If it weren’t for my book clubs, I’d only ever read Tolkien, epic fantasy or the occasional space opera. Thankfully, I have many wonderful women in my life who push my reading boundary buttons and pull me out of my comfort zone. This book, a true crime non-fiction selection published a couple of years ago, was recommended to me last year by one of my small town local library book club members. Killers of the Flower Moon was our final book of the month selection for 2019, which we discussed in mid-November. We typically skip December and choose to read a classic over the winter months for discussion in early January. This year’s classic is Hard Times by Charles Dickens.

Nine of us gathered at the local library for our discussion. A couple of us read the audiobook but most of read the print edition. The general consensus about the book was favorable (good research) but before reading Flower Moon, none of us had heard of the Osage murders, and we are within a couple of hundred miles of where they occurred. Even odder, as I noted during our discussion, that Tim White, the special agent in charge of the murder investigation, left the Bureau to become the warden of the federal penitentiary in Leavenworth. Even more shocking, our resident skeptic (which really isn’t the right word but I can’t think of one that means ‘person who rarely likes the books we read as a group) stated she enjoyed reading Flower Moon.

With respect to the audiobook, I became distracted by Will Patton’s narration. Not because it was ‘bad’ but rather because it was so amazing. I felt sorry for the other two narrators because when compared side by side (or as book ends) to Will Patton’s performance, theirs was forgettable. And that is why I took a half star off of what would have been a four star rating. The content was informative, well researched and sparked very good group discussion. The audio production gets five stars for Will Patton and three stars for the other two.

This book club is still finalizing what we’re reading in 2020. The polls are out and as soon as I get the results, I’ll update our GoodReads group book shelves and post the slate here and at the library. We at least know what we’re reading for January and February. Beyond that, you’ll have to wait and find out! 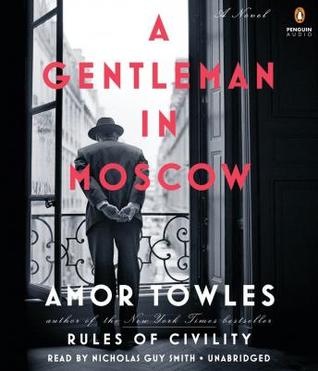 My January is fully stocked with reading, book clubs and even a lecture (on a book of course). Tomorrow, I start listening to the audiobook of A Gentleman in Moscow by Amor Towles to discuss next Thursday, the 10th, at my local library here in Lansing.  It’s going to be tight to get it finished before then since the unabridged edition is fourteen CDs long.  That’s normally twelve daily commutes so I’m going to have to double-up on lunch listening and while on the elliptical.

To see what else we’re reading and discussing in 2019, please download our 2019 wall calendar here. You can also find the book covers in the right-hand pane of this blog under “Lansing Community Library Adult Book Group.”

Two other book clubs I nominally belong to are reading the following:

END_OF_DOCUMENT_TOKEN_TO_BE_REPLACED Best Book(s) read in 2018:  The Murderbot Diaries (all of them) by Martha Wells

Best Non-Fiction:  Never Split the Difference: Negotiating As If Your Life Depended On It by Chris Voss

I read one hundred and four (104) books of varying length in 2018.  The longest book award goes to Brandon Sanderson’s Oathbringer (1,248 pages) but at least it was an ebook. The second longest book was only available in print and, at 1,013 pages, Islandia by Wright was heavy reading. END_OF_DOCUMENT_TOKEN_TO_BE_REPLACED

When it comes to Android apps that purport to provide me access to the digital resources of my local library, I’ve learned to not set the bar very high, if at all. All of the apps I’ve tried, and still struggle with, have slowly improved over the last couple of years, but whenever possible, I avoid using them for the same reason I only purchase audiobooks from Downpour: no proprietary software required and no DRM applied.

END_OF_DOCUMENT_TOKEN_TO_BE_REPLACED END_OF_DOCUMENT_TOKEN_TO_BE_REPLACED

Summer reading programs at all my local libraries are in full swing this first week of June.  Nearly all the libraries have great programs, activities and prizes for both kids and adults and this year’s theme is “Build a Better World” (see links below for libraries shown here).