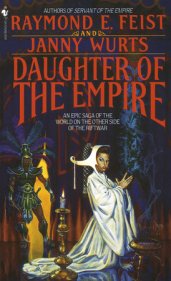 Daughter of the Empire by Raymond E. Feist and Janny Wurts

I could never see myself becoming a Mara, but I thoroughly enjoyed reading of her struggles and setbacks, her uncanny ability to turn even the most desperate tragedy into a resounding triumph. Daughter of Empire occurs on Kelewan, the home world of the Tsuranuanni, the flip-side of the coin that embodies the Riftwar Saga (as told mostly from Midkemia through Magician, Silverthorn and A Darkness at Sethanon).

Despite a near complete lack of traditional fantasy elements, this novel delivers an astonishing number of surprises, twists, intrigues and gambles. The rich world of Kelewan and the culture and heritage that is the Tsuranuanni Empire infuse all aspects of the reading experience. Mara’s journey from virginal novitiate to one of the twenty gods of the Tsuranuanni to ruthless Ruling Lady of one of the oldest Houses in the Empire steeped us in her gut-wrenching grief, unflinching resolve through spousal abuse and sweet relief through each successful gambit in the Game of the Council.

I plan to continue reading the rest of the Empire Trilogy and highly recommend this first installment in that series.

For more discussions of Daughter of Empire, led by one of the authors, Janny Wurts, and including a Q&A thread with Raymond E. Feist, follow this link.

One thought on “Book Review: Daughter of the Empire by Feist and Wurts”