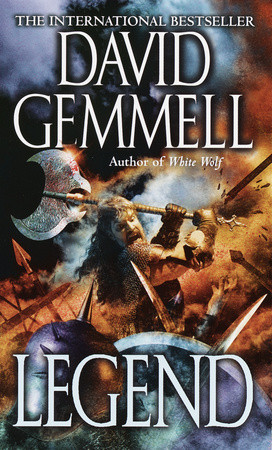 I could hardly put this book down. How did I miss reading this book when it was first published in 1984? How has David Gemmell managed to stay off my reading radar for nearly thirty years? And worse, upon finishing Legend, I learned David died six years ago. I nearly wept as I did for Virae and Druss and Rek and Serbitar. Not even sixty years old when he left us for the Forever Halls.

The themes are still thrumming through my being – Life and Death; War and Peace; Honor, Duty, Courage, Fear, Betrayal, Despair, Hope and Love. The depth of characterization surprised me despite Gemmell’s concise prose. Rarely have I been drawn to characters so adeptly and abruptly.

For a fantasy novel, Legend had less of the traditional fantasy elements (magic, strange creatures, etc.) and more close-up violence (comparable to Conan or other sword and sorcery standards) than I’ve read recently. Still, it contained some of the best fighting scene’s I’ve ever read. And it held me morbidly enthralled, watching the doomed desperate, surely futile, struggles of the defenders against the inexorable endless tide of invaders. I did not connect the dots until after I finished Legend and read up on David Gemmell’s life. Now, in hindsight, it seems all too obvious.

“Legend is the Alamo spirit – or what should have been that spirit.” — David Gemmell on the influence of The Alamo in an interview with Stan Nichols in 1989.

My first foray into heroic fantasy left me gasping for more. Today is always a good day to die … or live.

Read (and joing) the discussion of this novel held during November 2012 at the Fantasy Book Club group at GoodReads.com.