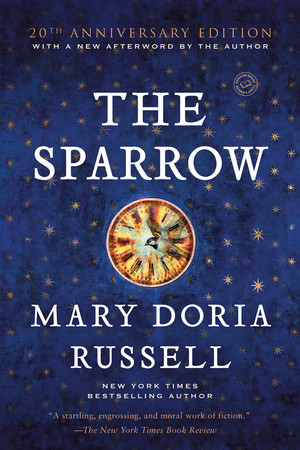 The Sparrow by Mary Doria Russell

During a long trip back and forth to Houston, Texas this past weekend, I listened to the audio book version The Sparrow. The narrator, David Colacci, did a fairly good job of narrating. Some of his voice characterizations were too similar to distinguish between the individuals in a heated debate or conversation. I particularly disliked his female voice impersonations. It was at times difficult to hear some of the dialogue, which was whispered, over the high decibel level in a vehicle without increasing the volume so much that the next person to speak was shouting, literally, through my car stereo speakers.

The story is a first contact story but also a journey of faith for one man – Emilio Sandoz. The story starts at the end and bounces back and forth on two separate time-lines until convergence and revelation are achieved at the end. This literary device is one of my favorites so I enjoyed the pacing and enlightenment immensely.

I plan to read the sequel, Children of God, as many others have recommended it as the completion and fullness of Emilio’s story.