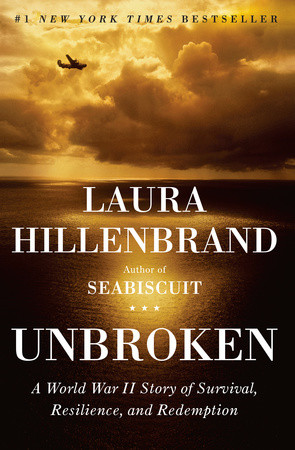 Unbroken was the May (and unexpectedly June) 2013 selection for Stranger Than Fiction book discussion group sponsored by the Kansas City Public Library. I covered all the bases on this one, trying to get my husband to read along with me, but alas his health took a turn for the worse during this time, so the hardcover edition I checked out from the library for him sat gathering dust.  Meanwhile, I alternated between the ebook edition, checked out through the library’s Overdrive app on my Android smartphone, and the audiobook on CD (also checked out from the library).  I much prefer listening to non-fiction than reading it.  Nothing puts me to sleep faster than non-fiction, but I  soon became ensnared by the riveting, nearly unbelievable facts, told in Unbroken.

Earlier this year, I joined the Stranger Than Fiction book group because I felt I needed to expand my reading horizons.  I often find myself in a repetitive reading rut, gorging on epic fantasy or the occasional fun space opera, but nothing much else of substance.  The only non-fiction I regularly imbibe in are technical manuals for the software I support at work.  I’ve read so many of those, I think I could do technical writing in my sleep.

Unbroken often made me wince, and cry, and despair for an end to the torture and cruelty.   I learned things about the Pacific conflict during World War II that I did not learn in school, nor from countless war movies I’ve watched over the last three decades.  On the one hand, I’m appalled at the treatment of our POWs by the Japanese.  On the other, I’m disappointed in our education system for focusing too much time on the European theater (because we have a collective societal racial bias towards the Western World?).

Some of the discussion questions from our group meeting follow:

What made it so Louie could survive?

One reader began discussing something he’d read about varying levels of testosterone.   We discussed Mac’s panicky eating of all the chocolate, where one of us quipped ‘death by chocolate’ and immediately retracted by stating ‘How dare I?’ because none of us knows how we would react in a similar situation.

What did you find most remarkable about three survivors on the ocean?

Our discussion leader’s immediate answer was ‘not eating Mac.’  Forty-seven days on a raft, half of their body weight lost, he asked us if we would consider cannibalism?  He further went on to define two different types of cannibalism: necro and homicidal.  I jumped in to this discussion, stating that after reading The Terror by Dan Simmons, I’d never, ever resort to cannibalism.  Some discussion resulted in the medical research and reasoning for why it is never a good idea to eat your fellow-man.

In the 30s and 40s, were Germany and Japan’s acts of mass atrocities the worst in history? What causes a society to stoop to this? Do we all carry this capacity for cruelty around inside of us?

Discussion resulted about authoritarian or totalitarian regimes and people being like sheep (even today) and preferring to be led around and told what to do.  Our leader provided a quote from Conservatives Without Conscience by John Dean.  I don’t have the exact words from my notes, but something about they ‘like being in charge’ and the ‘followers like feeling safe.’  One reader talked about sociopaths and psychopaths making up 20% of the population (now and then).  Another reader mentioned an experiment conducted in the 60s or 70s where a group of people were divided up in to prisoners and guards and another study about blue and brown-eyed people.

Louie appeared to be the beneficiary of several miracles: his escape from the plane; the bullets missing all occupants of the raft during several strafing runs; and, singing angels in the clouds overhead.  Someone made mention of the Best Years of Our Lives movie.

Would Louie have been justified in plotting to kill the Bird?  Would that have been moral? Would he have felt better had he returned to Japan?

His anger is justifiable and understandable, a normal reaction to being wronged.  Our discussion leader quoted several passages from a Guideposts article written by the author: “The Power of Forgiveness”  Another reader compared Unbroken to the movies “The Grey” and “Life of Pi.”

Next month we read Undaunted Courage by Stephen E. Ambrose.