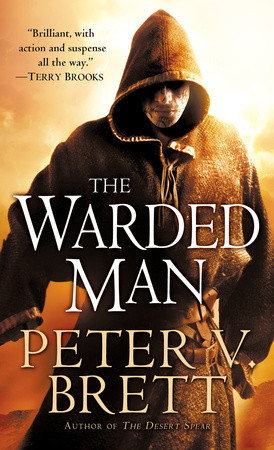 I devoured this book, ravenous as a coreling in the night. Excellent world building, great character development, driving plot and riveting action. I’m panting and sweating just thinking about the last desperate battle.

Some of my favorite bits of the world building include a post apocalyptic setting, almost an alternate history of our own reality, where humanity is facing extinction from supernatural elements (demons) holding people hostage with terror as they roam the nights freely; ward magic lost in the mist of time and only rediscovered sparingly and with great difficulty; and, the presence of religious and racial prejudices dividing rather than unifying at the expense humanity’s survival.

About two-thirds finished, I yearned to give a five star rating because I became so invested in the characters I wept for their pain, misadventures, obsessions and short-sightedness. But the characters I loved were abandoned, left behind, or symbolically sacrificed and reborn into even more crazed incarnations.

The healing of mind and soul attempted during the last few chapters stretch my believability nearly to the breaking point and left me wishing that men really could walk in a woman’s shoes (or her body) before assuming we overcome, endure or recover like men. Without spoiling, I can’t convey how soured I became with the author for that one pivotal event.

Notwithstanding the sour taste in my mouth for that plot point, I couldn’t put this book down or turn pages fast enough. I plan to seek out the sequel, The Desert Spear, when I return this book to the library tomorrow.