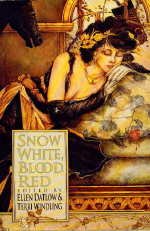 Like a Red, Red Rose by Susan Wade (4 stars) ~ Several fairy tale motifs are present in this story including a cottage in the woods, an innocent girl, a witch and a prince. Wades recombines the old ingredients into a new recipe as effective as any of the traditional variations.

The Moon is Drowning While I Sleep by Charles de Lint (3 stars) ~ The dream world crossing over into the real world and possibly into Faerie just didn’t do it for me.

The Frog Prince by Gahan Wilson (2 stars) ~ Even worse than the dream world in the previous story, this story has a delusional man convinced he’s hallucinating himself as the frog prince.

Stalking Beans by Nancy Kress (1 star) ~ This adult fairy tale was too adult for me and too male as well, especially since it was written by a female.

I Shall Do Thee Mischief in the Wood by Kathie Koja (2 stars) ~ Again a retelling of Little Red Riding Hood, from the wolf’s point of view and turned on it’s head.

The Root of the Matter by Gregory Frost (3 stars) ~ An average retelling of Rapunzel.

The Princess in the Tower by Elizabeth A. Lynn (4 stars) ~ A very good retelling of Rapunzel, from a male perspective, poignant ending.

Persimmon by Harvey Jacobs (2 stars) ~ Thumbalina but again, too “adult” for my tastes.

Little Poucet Steve Rasnic Tem (2 stars) ~ Another little known fairy tale that was too “X” rated for my tastes.

The Changelings by Melanie Tem (2 stars) ~ Pitiful mother of a changeling child and the ending will leave you disappointed by the delusion.

The Springfield Swans by Caroline Stevermer and Ryan Edmonds (4 stars) ~ A wonderful retelling of “The Wild Swans” using a baseball team theme.

A Sound, Like Angels Singing by Leonard Rysdy (3 stars) ~ It’s not until you are almost finished that you realize this the Pied Piper told from the point of view of a deaf or at least tone-deaf mother rat.

Puss by Esther M. Friesner (4 stars) ~ Immortal cats with wings, personalities and powers but bound to mortals by honor.

The Glass Casket by Jack Dann (4 stars) ~ My favorite short story of the collection. Reminded me of “The Inner Light” my favorite Star Trek TNG episode that one a Hugo.

The Snow Queen by Patricia A. McKillip (4 stars) ~ My second favorite story of the collection – a modern day love triangle between Gerda and Kay (who are married) and Neva (the Snow Queen).

Breadcrubs and Stones Lisa Goldstein (3 stars) ~ Hanzel and Gretel meet the Holocaust – full of regrets and secrets held too closely to the breast and unto the deathbeds of the survivors.