Speaking of astronomy, I’ve upgraded, finally after two years of paralysis analysis, from the Meade ETX 90, gifted to me by my father in October 2010 (also, unsurprisingly the birth of this blog site), to an Orion SkyQuest XX14G.  Last night, Terry and I disassembled it from its place of honor in our entertainment room and squeezed it into the trunk and back seat of our Bonneville. 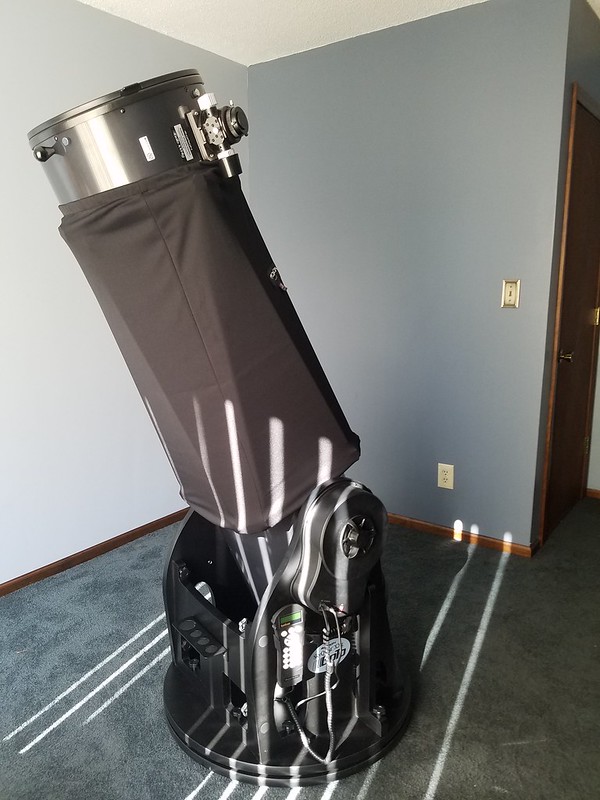 We headed south to the Astronomical Society of Kansas City’s Powell Observatory to get our feet wet with this new scope.  Not everything we’d ordered back in August (accessory-wise) had been delivered yet, but we couldn’t resist the predicted clear skies Friday night.

Pardon this brief shout out to the ASKC, reminding the public at large (that means you) that Powell is open every Saturday night from May through the end of October.  So I’ll be back out at Powell as a volunteer tonight and I hope to see you there.  For more information, please check out our shiny new star-studded website!

Our drive to Louisburg went quickly until we hit the parking lot at I-435 & I-35.  Thanks to a traffic accident, most likely the result of rush hour traffic, we spent 10-15 minutes idling at a snail’s pace.  We eventually arrived at Powell with the sun already dipping below the trees on the western horizon.

Terry and I quickly unloaded the various parts of the scope and began reassembling it.  It took us about 10-15 minutes to disassemble it for transport and a bit longer to reassembly because we were also socializing with other ASKC members who were on site.  This is also why I don’t have any photos from last night to share here.

The process that took the longest and continues to be our frustration with the new scope is collimation.  Even watching Orion’s helpful video (see below), reading the manual and various web sites, Terry and I are still novices with this process.  We rapidly ran out of light, but thank goodness we splurged and bought the laser collimator as an accessory or we would have been unable to observe.  Despite doing a couple of collimations at home, we still have a long way to go to get this process down.

I hooked up all the electronics, including the wifi hotspot accessory that would let me control the scope from my tablet, but I didn’t initially use it for aligning the telescope for goto operation.  Having read the manuals a couple of weeks ago, and being an IT software admin at my day job, I assumed I’d have no qualms or obstacles I couldn’t overcome electronically.  I leave hardware to those with a mechanical bent, like my awesome hubby who dialed in the collimation noted above.

However, I shot myself in the foot, so to speak, by aligning the scope with the handheld controller instead of using my tablet and the StarSeek app to do that.  Again, had I re-read the manuals yesterday, I might have seen the light sooner.  I wrongly assumed I could align the scope with the handheld device and then switch to the tablet.  Nope.  I should have left the hand controller in the cradle and done everything from the tablet, including the alignment.  Because, once I got it aligned with the controller and switched to the tablet, I reset the scope which then required realigning.  Ouch.  I opted to unhook the wifi and tablet for this first outing.  The hand controller was more than adequate to the task of serving up the best of the night sky for Friday, September 23, 2016.

One other laughable (now but not so much then) issue involved finding the longitude and lattitude for Powell Observatory to enter into the hand controller.  I know for a fact it’s available via our website and via Google Maps, but the controller requires the format W 94° 42′ not the decimal equivalent.  I eventually found a website that quickly gave me that information but had I turned my tablet back on, which already had GPS running, and returned to the StarSeek application, the Settings section for your current location provides this exact information in the applicable format.  Sometimes, I over think these things.

Some of the objects we observed in no particular order (because I did not keep a log – yeah, I know, Scott Kranz is not going to be happy with me):

Sometime during the evening I managed to unscrew/drop/lose one of the set screws for the 2″ eyepiece assembly extension.  We tried vainly to look through the grass around the scope but gave it up for lost.  Terry will contact Orion and probably order a dozen of these because this probably won’t be the last time this happens.

Only one other club member was still on the observing field when we started disassembling the telescope and repacking it back in the car.  Hampered somewhat by the dark, but armed with three emergency lights that we dared to turn on because we were the last ones standing on the field, we managed to not leave anything important behind.   I will be back on site this evening as a volunteer for the public night observing session so I will double-check but feel pretty confident the only thing we left behind was a small shiny set screw.

Once we arrived home I let my hubby out at the mailbox as we had forgotten to check the mail the previous afternoon in our excited planning and packing for the trip to the observatory.  He handed me the package containing the last ‘missing’ accessory needed to complete our telescopic observing setup: two dew heaters.  We survived without them last night, but it’s a relief to have them in my observing toolkit for future stargazing excursions.