An excellent analysis of one of my favorite Disney classics, Sleeping Beauty, posted at Tor.com and authored by Mari Ness.

Arrrrr! Say it isn’t so me matey.

But don’t let this stop you from participating in Speak Like A Pirate Day! Savings Mr. Banks jumps back and forth between END_OF_DOCUMENT_TOKEN_TO_BE_REPLACED

Thirty-five years ago I got sucked into Lucas’ Star Wars like most everyone else in the world.  I can’t tell you how many times I’ve watched that movie since then.  More than once in a movie theatre, and many, many times since via my own home theatre.  Every word of dialog is memorized.  Every scene emblazoned on my mind’s eye.  Every soaring sound of the score composed by John Williams ringing in my ears.  It was the right movie magic at the perfect time.

So I scratched my head earlier this week when my phone kept crawling across my desk or buzzing in my pocket because of the swarm of tweets bombarding cyberspace about Disney buying Lucasfilm.  I didn’t get a chance to really delve into that development until days later, thanks to endless meetings at work.  I did glimpse some pretty funny images cropping up in my newsfeeds.

Here are a few of the ones that caught my eye: 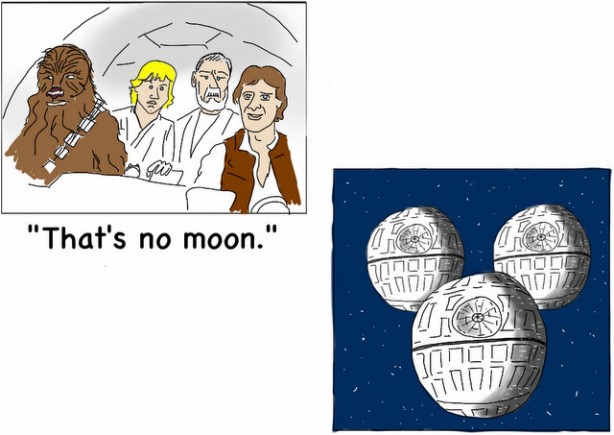 And my thoughts on the billions Disney gave George for the Star Wars franchise? At least there will be a seventh movie. I’ll keep hoping it will better than the last three.  George doesn’t need to worry about his retirement now (not that he ever had to worry much).

Meanwhile, I’m still missing those droids I was looking for . . .