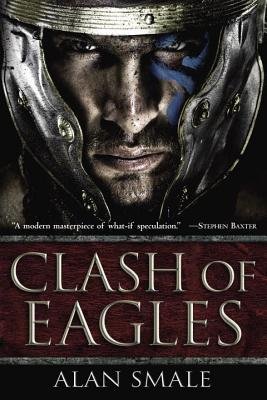 Good but not great.

As other reviewer(s) have noted, this ends up being a one-man show almost exclusively – Marcellinus, the Praetor of the XXXIII Legion, marching west across the Appallacians towards the mighty Mississippi years before Horace Greeley penned the phrase “Go West, young man.”  The Romans, and their Norse scouts, encounter various Native Americans with startlingly advanced technology for a stone-age culture lacking even the wheel*.

Marcellinus is the only truly fleshed out character.  All others – Romans, Norsemen, Native Americans – are barely cardboard cutouts in comparison.  Some of the Cahokians, in the latter half of the book, get more interesting, but not by much.

The book as a whole was an interesting mental exercise of “what if” the Roman Empire hadn’t collapsed and continued conquering beyond the European, African and Asian land masses to North America?  And equally interesting were the advancements predicted among the natives.

My thanks to Netgalley for allowing me to read an eARC of Clash of Eagles before its official release this month.

* I learned from reading Guns, Germs, and Steel: The Fates of Human Societies by Jared Diamond that if not for the Spanish leaving horses behind after their conquests, no other beasts of burden were available to the natives of North America for domestication.  Bison excluded.  Without domesticated animals, the usefulness of the wheel diminishes.

One thought on “Book Review: Clash of Eagles by Smale (3.5 stars)”