It was raining and thundering this morning.  That means a perfect day to make bread.  I asked Terry what type of bread he would like me to bake and he said ‘honey oat.’  So I went to my favorite flour company (King Arthur Flour) and searched through their recipes for an oat bread.  I landed on the Vermont Whole Wheat Oat Honey bread recipe with 207 reviews and an above four star rating.  I thought I’d made this recipe in the past, so I blithely started dumping the ingredients into the pan of my bread machine.  My first clue that this was NOT a bread machine recipe should have been the two cups of water.  Most bread machine recipes are between one and one and a third cups water with three to four cups of flour.

The light bulb finally went off after I’d boiled the two cups of water.

I grabbed the mixing bowl from the Kitchen Aid mixer and rinsed out the breadpan ingredients (basically just the brown sugar and honey) into the mixing bowl.  I then dumped in the salt, cinnamon and oats and set it aside to cool for about twenty minutes.

I dumped the contents of the mixing bowl into a measuring cup and poured half of it back into the pan of the bread machine.  The rest went back into the mixing bowl.   I added half the whole wheat flour to the pan, following by half of the all-purpose flour and topped it off with a half tablespoon of yeast.  I put the pan in the bread machine and told it to begin the dough cycle.

I put the dough hook on the Kitchen Aid and added the other half of the whole wheat and all-purpose flour plus the half tablespoon of yeast.  The directions in the recipe say to knead with the mixer for about 5-7 minutes.  I did seven just to be sure.   I put that dough in a greased glass mixing bowl covered with plastic wrap and let it rise until the bread machine was finished with its dough cycle.

I shaped the loaves and put them in two lightly greased identical bread pans and covered them with plastic wrap to rise for another 60 to 90 minutes.  I baked them in a 350 degree oven for 30 minutes. 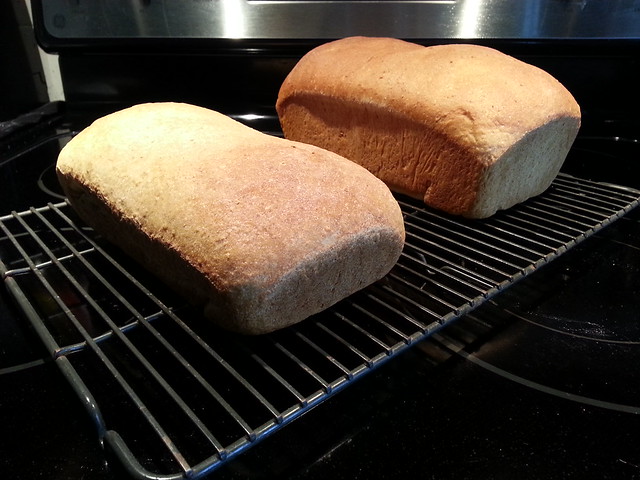 I knew something wasn’t quit right when I put the loaves in the oven.  I probably should have let the dough from the mixer rise a bit longer.  The loaf on the right in the photo above was mixed, kneaded and raised in the bread machine.  The one on the left was mixed and kneaded in the Kitchen Aid and risen in a glass bowl.  Hmmm … I know which one I’m more likely to eat.