I received an invitation from Kaite Stover, Director of Reader Services for the Kansas City Public Library, a few weeks ago, asking me if I would like to read The Muralist by B.A. Shapiro (also author of The Art Forger) and attend the discussion to be held at the Nelson-Atkins Museum of Art on Saturday, March 19th.  I readily agreed because the book sounded interesting and there was the added bonus of a special tour of the Contemporary Art gallery conducted by the curator, Jan Schall, Ph.D.

Kaite couriered a hardcover edition of The Muralist to the Plaza Branch, which happens to reside in the same building I spend every weekday in, just on a different floor.  I also placed a hold on the eAudiobook held in the Overdrive collection for the Kansas City Public Library, but I didn’t have much hope of receiving it before the deadline (and I still haven’t made it to the top of the hold list).  I branched out and found an Audio CD available from my local library in Lansing and quickly requested the item.  Within a couple of days, I picked up the CDs and began listening to The Muralist while commuting and walking my dog, Porthos.  I finished listening to the audiobook in less than a week (between March 10th and March 16th).  I probably could have read the hardcover faster, but I really enjoy listening to the voice actors and their abilities with voice characterizations, foreign phrases and accents.  I enjoy the added depth listening provides above my mind’s dry recitation.

I tried to stay away from searching on the Internet for information or images of modern art from the period portrayed in The Muralist so I wouldn’t spoil the tour.  I did, however, unexpectedly or serendipitously stumble upon art by one of the famous artists portrayed as a friend and peer of Alizée.  In the midst of reading The Muralist, I took a break to watch a film I hoped to nominate for a Hugo award this year (nominations are still open until the end of March).  I watched Ex Machina, which I found a very intriguing, intelligent and intense science fiction psychological thriller.  Hanging on the wall of the home office of the creator of the AI robot was a huge mostly dark Pollock painting, which fit perfectly with the other themes portrayed during the movie.

Saturday arrived cold and dreary, a bitter reminder that Spring had not yet officially arrived. I drove to the building where I work to park my vehicle, planning to walk to the Nelson-Atkins (only about 15-20 minutes and I needed the steps).  I found the information desk on the east side of the building and joined about forty other people waiting to start the tour.  I checked in with Kaite and enjoyed the intermittent sunshine warming the lobby. 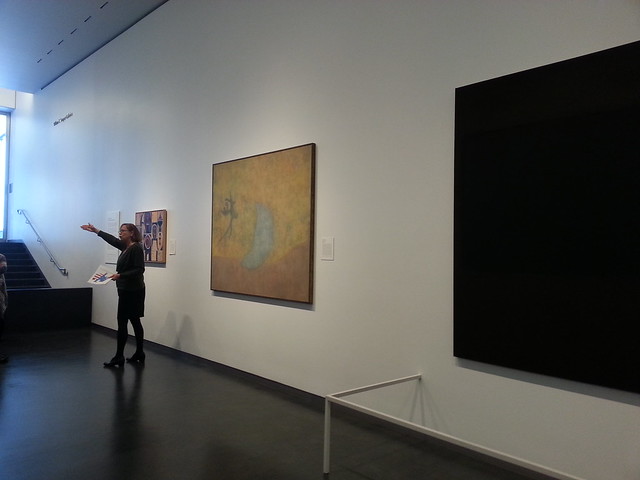 Dr. Schall introduced herself and led us to the Contemporary Art gallery and gave us a bit of history about the art museum, the WPA’s Federal Art Project and the evolution of art to a more internal expression of emotions in contrast to the traditional representational variety.  Most of the people portrayed in The Muralist were employed as part of the Federal Art Project, some as muralists, others simply as artists.  Even Elanor Roosevelt made an appearance, albeit one that stretches believability a bit.

After the tour, we traversed ramps and stairs to reach the library.  Yes, the art museum is home to an art reference library.  All forty plus of us squeezed into the small space, grabbed some coffee and a cookie and settled in to discuss The Muralist while Kaite Stover facilitated and took copious notes for her article for the Kansas City Star‘s FYI section.  Marilyn Carbonell, Head, Library Services, gave some brief opening remarks about the Spencer Art Reference Library and the services it provides to the community and to local artists.

Kaite then welcomed all of us and commented that our group was probably the largest FYI book club gathering she’d seen.  She first asked “Did the tour help your understanding of the book?” to which we all heartily agreed.   One participant wished she could have seen the protagonist’s paintings.  Another expressed some misgivings about the joint endeavor on Alizée’s mural.  She found it hard to believe that Pollock, Krasner and Rothko could collaborate on a work where they really didn’t believe in Alizée’s vision.

We segued into discussing the historical veracity of events related in The Muralist, including the turning away of the St. Louis, Breckenridge’s role in limiting and refusing visas to refugees fleeing Europe, Lyndon Johnson’s efforts to smuggle in refugees through Houston and Elanor Roosevelt’s lost causes or taking in strays like Alizée.  Some readers felt the author was a bit heavy handed with her efforts to include luminaries from the burgeoning art scene in New York and political elites like the Roosevelts.

We discussed Alizée’s mental illness(es) and how her passion and creativity seemed to feed off of or fuel either or both.  This led us to broach our thoughts on the ending.  I myself felt the ending was rushed and just too pat, too ‘tied off with a nice neat bow’ or too much of a ‘Hollywood’ ending.  Many others expressed similar disappointment with the latter part of The Muralist.  Marilyn did mention that the name “Josephine” means “God will increase” or “God will add” and she felt this was a symbolic choice made by the author for Alizée’s complete transformation.

We wrapped up by talking about how this type of book opened us up to abstract expressionism and other forms of modern art, how this type of art is more emotional and expressive.  One reader felt the art itself became a character in The Muralist.  Another reader agreed with Elanor’s statement in the book about Marin’s painting Bryant Square and how it opened her eyes and heart to the abstract expressionists art.

Many readers also recommended reading The Art Forger, stating they felt it was a better book.  I’ve already borrowed the audiobook to listen to next week, this time using Hoopla, because the hold list on Overdrive was quite long.

Before I made the return walk to my vehicle, I climbed a few more stairs to the American Art gallery.  I did see a small work by Pollack, but mostly the more recognizable works of the Depression Era and WWII by Wyeth and Benton.  In fact, I was so struck by one Wyeth painting, that I put a hold on the book Drums by James Boyd from my smartphone while admiring this painting: 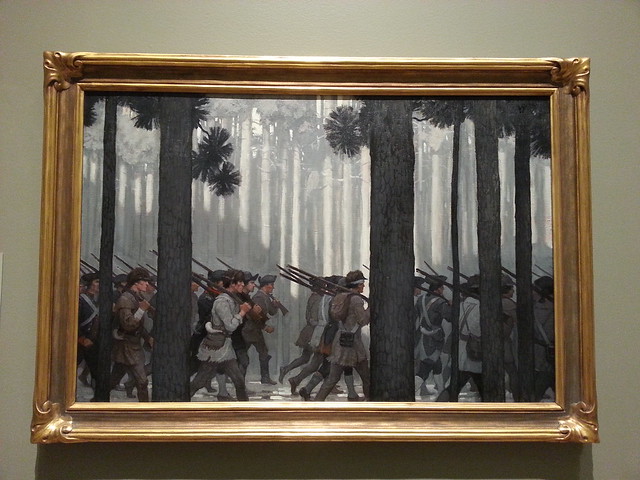 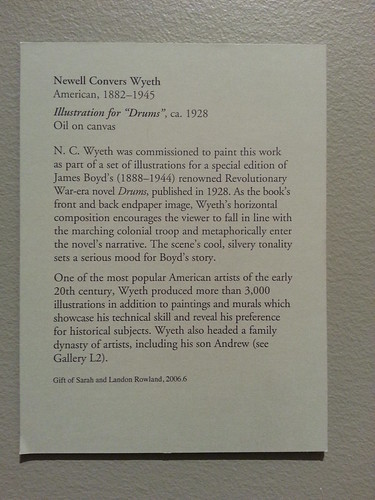 Two other paintings that caught my eye in the gallery include: 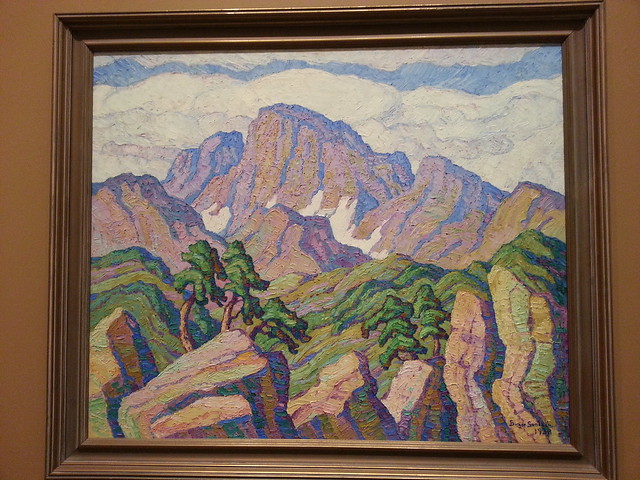 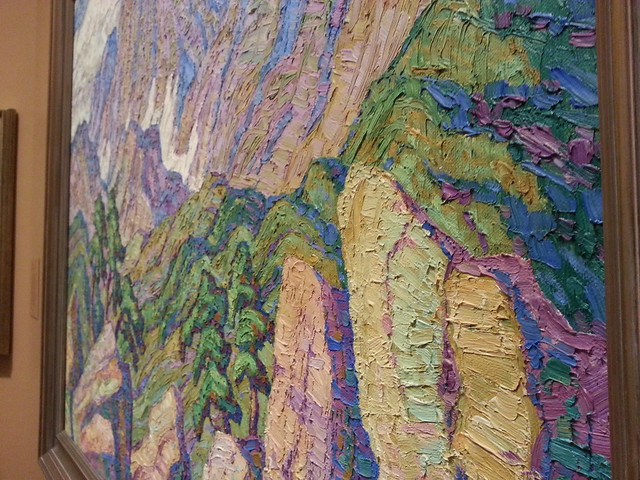 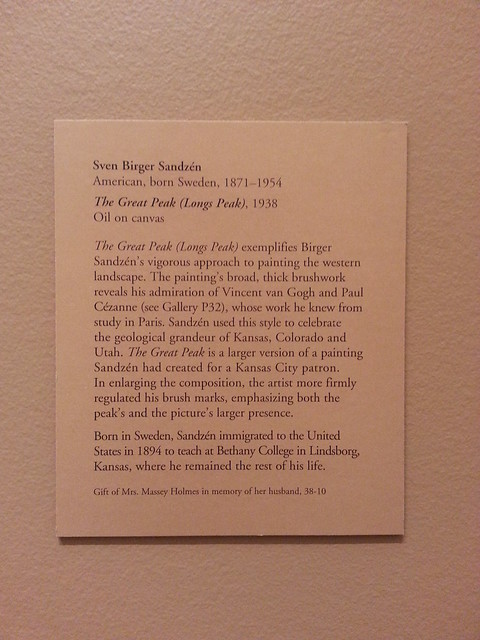 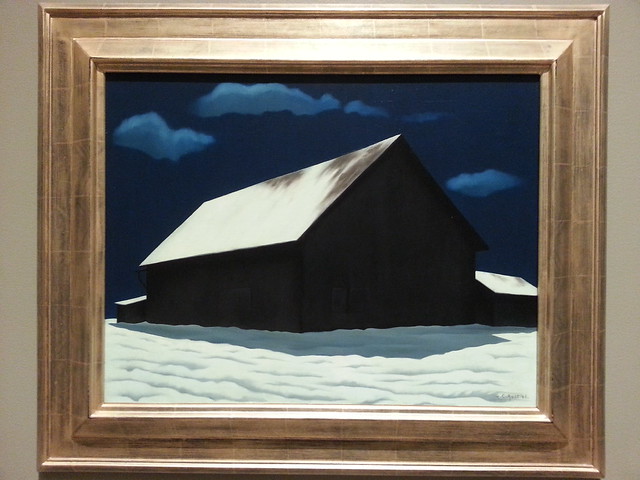 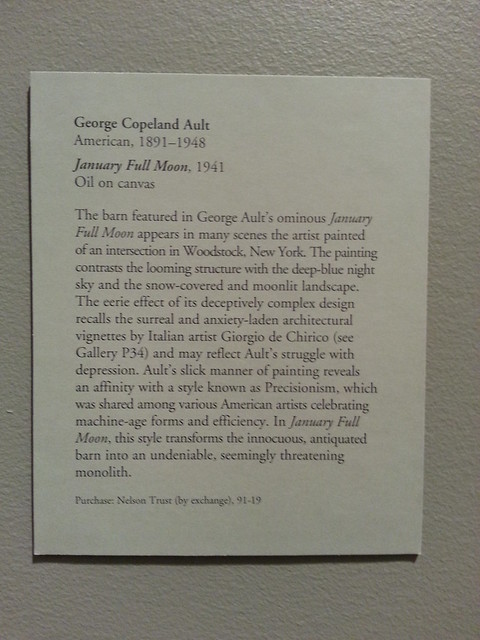