Months go by.  Life gets stressful at home and work.  I need a diversion.  One Saturday afternoon recently, after I’ve been through the Dish programming guide three times and found no movies to watch, I settle on a marathon showing of Mysteries at the Museum on the Travel Channel.  I let the episodes roll quietly in the background, only perking up with something interesting presented itself, like the one about Beethoven’s metronome.  Beethoven, I thought to myself.  Hmm…

Flashback to the Late-70s

I once read an entire trilogy while simultaneously listening to an 8-track tape playing Beethoven’s Fifth Symphony continuously.  To this day, whenever I hear any snippet or soundbite from that symphony, I get intense flashes of scenes from those books.  What books, you ask?  Not something you’d expect a 13-14 year old to be reading, but they were some of the most intellectually stimulating and vocabulary stretching books I’ve ever read: The Chronicles of Thomas Covenant the Unbeliever by Stephen R. Donaldson.  One of only two authors who ‘forced’ me to purchase an unabridged dictionary (remember, this was before the Internet and Google) to keep up with the avalanche of rarely used words.  I still have that dictionary, and another I picked up at a garage sale a few years back.  Both of them are quite dusty now and buried in a storage closet or the back of a cabinet.

I read mostly at bedtime.  Chores or homework took up most of the rest of my time.  Or riding my bicycle (in the summer) the two miles into the small town nearest my childhood home.  Everyone went to bed no later than right after the end of the nightly news (10:30 p.m.).  When I was younger, this of course meant more like 8:30 or 9:00 p.m.  And you were up with the sun.  Did I mention I live in Kansas?  This is just the ‘norm’ for a farming community.  I never had much interest in watching the news (still don’t – it’s not ‘news’ it’s journalistic ‘entertainment’), so if we weren’t watching a movie together as a family (yes, we had a Beta Max), I’d head upstairs to my bedroom, push in the tape of Beethoven’s Fifth and crack open whichever book I was reading.  Scenes from The Illearth War come to mind most frequently when I hear the second movement.

In the mid-80s, I headed off to college at Wichita State University, initially in pursuit of an electrical engineering degree (as a direct result of all the hours I spent with my dad in his amateur radio shack and attending ham fests and installing radio equipment and antennae).  That morphed into computer science and mathematics.  My alarm clock came with me, but I don’t remember if the 8 track of the Fifth followed me.  I think by that point, I was just listening to the radio instead of worry about a music catalog in a dying media format.

I met my husband my freshman year.  We eventually got together, two to three years later, and my biggest struggle with his lifestyle was the difference in our sleep schedules.  I couldn’t fathom someone who didn’t go to bed by eleven o’clock, fall right asleep, and wake up at the totally reasonable hour of six or seven in the morning.  Really, I just don’t understand.

My husband is a night owl.  Most night’s he doesn’t come to bed or fall asleep until two or three in the morning.  Sometimes even later than that.  Thirty years on, I’ve accepted the differences between us and made peace.  But back in the 80s, I thought I was being helpful by setting the alarm on my clock radio to go off at the appropriate hour so that Terry wouldn’t be ‘wasting daylight’ by sleeping in.  The funeral for my clock radio was brief, but poignant.  I’m not sure we ever found all the bits and pieces.

Return of the Fifth

Which brings us back to the present day and my search for a digital edition of Beethoven’s Fifth Symphony to listen to.  Naturally, I turned immediately to Hoopla and found many available audio and video recordings to choose from.  I borrowed The Beethoven Symphonies 1-9 – Beethoven Symphony No. 5 and watched it via Chromecast.  In fact, I’ve been watching and listening to the symphony while I’ve composed this post, a fond trip down memory lane. 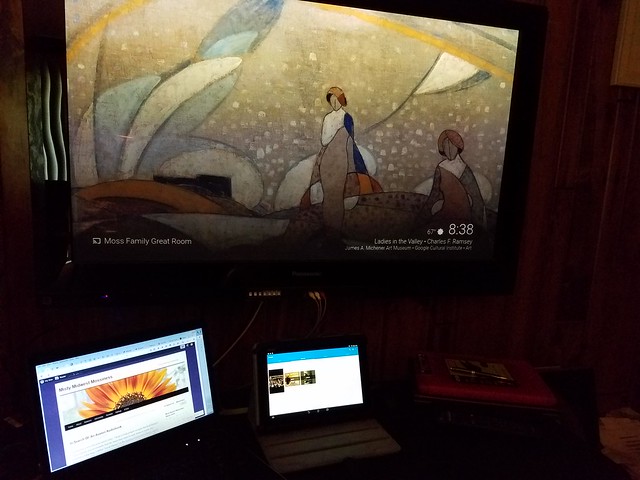 In the photo above, you can see my old 51″ plasma and my tablet below ready to start streaming the recently borrowed title. 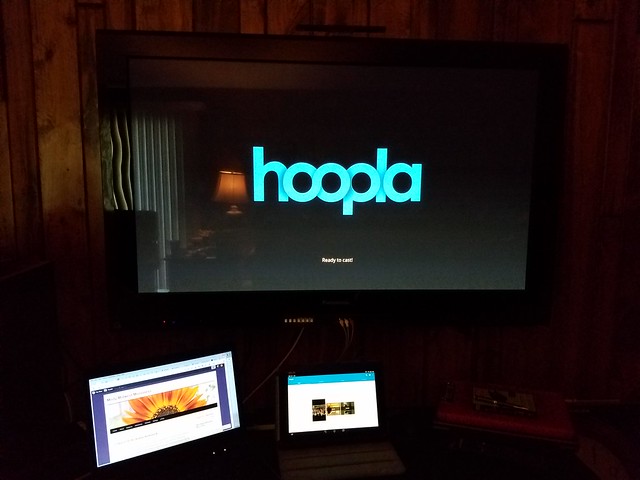 From inside the Hoopla app on my tablet, I press the Cast icon in the upper right-hand corner and select the appropriate Chromecast device.  In the example above, I selected my “Moss Family Great Room” device and the generic Hoopla ‘Ready to Cast’ screen displays. 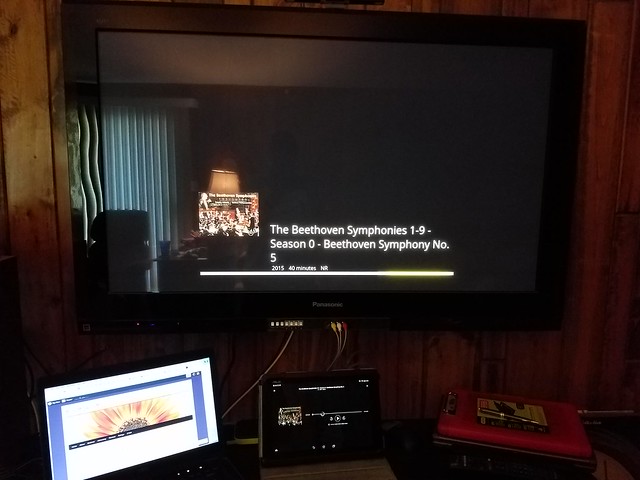 From my Hoopla home screen, I play the title I want to stream and after a few seconds of buffering, the somber, powerful notes of Beethoven reach my ears. 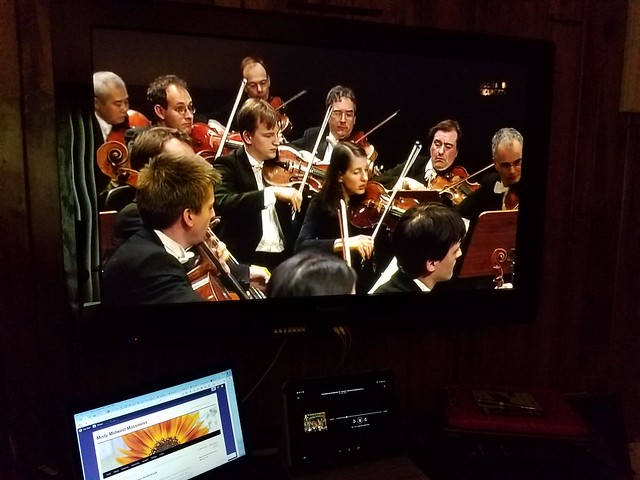 And for the next hour or so, I’m enthralled and enraptured.  It’s not quite the same as an eight-track tape playing continuously on a small vintage clock radio, but the themes still transport me to the Land on occasion.

During this adventure, I did determine that I can’t Cast audio-only borrowed titles from Hoopla.  Only video can be streamed to my Chromecast.  A bit of a disappointment, as my best sound system is downstairs hooked up to my 75″ smart television and I really wanted to listen to it with the best possible sound available in the house.  Time to upgrade my audiovideo receiver to one that accepts BlueTooth connections.

As ever, if you have any questions or feedback, leave a comment or email me directly.

And May the Fifth Be With You Always!