Once back home, I decided to break out the Celestron C8 I had recently borrowed from my astronomy club.  Despite dire predictions, the sky remained perfectly clear so I looked forward to an evening of planetary observing, since all five visible planets are ripe for the plucking at this time of year.  I got everything attached to the tripod and manhandled it outside to my lower patio, giving it a quick leveling and orientation north so I could get through a polar alignment swiftly.  Then I just had to wait for darkness to fall enough for me to see Polaris with my naked eye.  I discovered my electrical feed to my house was blocking the North Star in my finder-scope so I had to reposition the tripod to avoid it.  I finally saw a blurred donut through the eyepiece and reached for the focusing knob to adjust the image.  Imagine my surprise when instead of the image moving in and out of focus, it scrolled up or down depending on the direction I turned the focuser.  I released the clamps on altitude and azimuth so I could freely move the scope and slewed it around to Jupiter, clearly visible in the southwestern sky.  Again I found a blurred donut through the eyepiece but again the focus just scrolled the image up and down instead of in and out.  I tried multiple eyepieces with the same result.  Frustrated, I returned the scope inside and wrote an email to the club member who loaned me the scope.  Off to bed I went.

Saturday morning, I discovered my tallest sunflower plant had finally bloomed.  This plant is at least eight feet tall (if not taller).  I had to crane my neck back and use a zoom to get this photo: 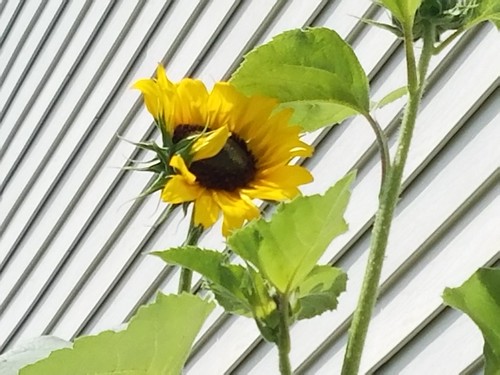 I received a reply back about the scope, and he offered me a different scope if I’d meet him somewhere.  I wasn’t really in a big rush, but Terry said he felt up to the hour-long drive to east of Kearney, Missouri, so I agreed to pack up the scope and venture east for a brief observing session at his location to confirm the other scope’s functionality.

But before that road trip, I spent three to four hours volunteering at the Lansing Community Library while we celebrated the end of our summer reading program with some animal visitors from the Kansas City Zoo. 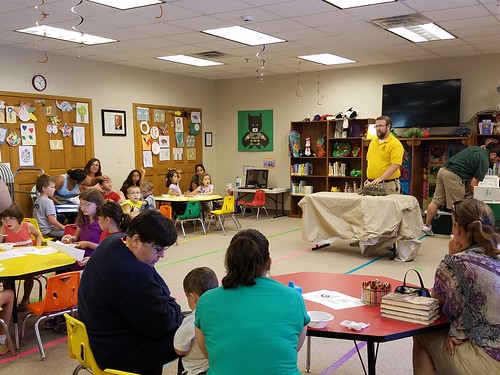 Knowing I was going to be up late Saturday night, I took a two hour nap late in the afternoon, after which I repacked the borrowed scope into it’s case and got it back in the Bonneville.  We grabbed a couple of large drinks from our local Sonic and then headed east, sort of.  I had two options for getting to Kearney.  Head north through Leavenworth and then just take 92 east from there, crossing the Missouri River at the same place where Lewis and Clark did over two hundred years ago.  Or, I could counter-intuitively head southeast from Lansing on K-5, then back north on I-435 to 152, then I-35 and ultimately US-69.  Of course, I chose the latter route because I’m just naturally contrary.

The sun had just set when we arrived.  We chatted amiably and ambled to his observing field and waited for the sky to darken.  I must say I was jealous of his location!  His skies are at least as dark as the club’s Powell Observatory site, if not a tad darker.  We could see the milky way and I had no trouble finding the globular clusters M4 and M13 with the ‘new’ borrowed scope, as well as the Ring Nebula in Lyra.  We spent a lot of time just chatting but we still stayed until nearly eleven o’clock.  I had to cut the session short due to scheduled system maintenance for my employer early Sunday morning.  But I was very pleased with the second scope (also a Celestron C8) and am looking forward to observing this week and the coming weekend.

I ended up working most of the morning, with a break involving a grocery store run, followed by a nap and then some house cleaning.  I had hoped to try the Alamo Draft House for the first time and see either Star Trek Beyond or the new Jason Bourne movie.  But getting only four hours of sleep the previous night did me in, even with a short nap.  Besides, it was a dreary, rainy Sundday.  So instead of driving to the watch a movie, I hooked up my laptop to my home theater system so we could enjoy live streaming of a concert by my daughter, Rachelle.  At six o’clock our time (four o’clock where’s she’s at in Seattle), we were thrilled to watch and listen to her sing several solo selections as well as some duets with Michael Heitmann, a bass baritone.

In case you missed her live broadcast via her Facebook page, you can watch it now at any time from her Contralto page:

I especially liked their encore duet, a song I haven’t heard performed in years (I don’t get out much) and it was great fun!

One thought on “Grande Finale to a Grand Weekend”