We plan on keep the display up through the month of October. Though it’s only celebrated for one week nationally, we feel that what the week stands for is something we can celebrate all year round.

How does a book get challenged?

According to the ALA, a challenge is any documented request to remove an item from a library or school. Anyone can challenge a book and the amount of details regarding a request vary from knowing the location, reasons, and whether or not it was removed to knowing nothing aside from the fact that it was challenged. The ALA estimates that 85% of challenges go undocumented, as they have no official or scientific way of collecting data – it’s a matter of what they hear about in the media and what is submitted to them.

Should there be a rating system for books like there is for movies and television shows?

The rating system question is harder to answer. It’s understandable if someone is wanting to know what they are getting when they pick up a book and whether or not it’s an appropriate or suits their taste based on content. If someone is concerned about the topics discussed in a book, there are many websites – such as GoodReads – where they can research the book and see what others have to say about the content. Adding a rating system is tricky because often times it’s the topics discussed or language used that one person may find unsuitable for a certain age group, but may be considered completely appropriate by the next person.

What banned book are you planning to read this year?

I’ve actually read a few on the list – Harry Potter, To Kill a Mockingbird, and The Hunger Games from past lists. For this year’s top ten most challenged, I’m really interested in reading Looking for Alaska by John Green and The Curious Incident of the Dog in the Night-Time.

Any LCL patron can grab any of these hot banned books right off of their hot little shelves (see display photo above).  We have plenty more banned books waiting in the wings for their moment in the spotlight and for your reading enlightenment.

For myself, I initially thought I would read Catcher in the Rye, which I probably should have read when I was in high school, or at the very least during college.  However, after reviewing my GoodReads friends reviews of Cather in the Rye, I have changed my mind (see below).

As I was taking photos of the LCL Banned Book display, I realized I’d read about half of the ones on display, including these two: 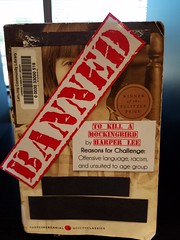 To Kill a Mockingbird by Harper Lee

Synopsis:  The conscience of a town steeped in prejudice, violence, and hypocrisy is pricked by the stamina and quiet heroism of one man’s struggle for justice, in this Pulitzer Prize-winning classic that has been translated into more than 40 languages. 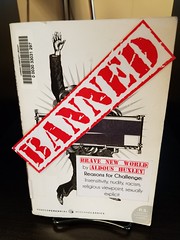 Synopsis: Far in the future, the World Controllers have created the ideal society. Through clever use of genetic engineering, brainwashing and recreational sex and drugs, all its members are happy consumers. Huxley’s ingenious fantasy of the future sheds a blazing light on the present and is considered to be his most enduring masterpiece. 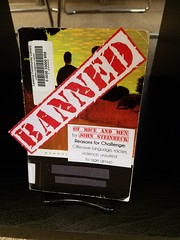 Of Mice and Men by John Steinbeck

Synopsis: Tells a story about the strange relationship of two migrant workers, who are able to realize their dreams of an easy life until one of them succumbs to his weakness for soft, helpless creatures and strangles the farmer’s wife. Tragic tale of a retarded man and the friend who loves and tries to protect him.  Tackling universal themes such as the friendship of a shared vision, and giving voice to America’s lonely and dispossessed, Of Mice and Men has proved one of Steinbeck’s most popular works, achieving success as a novel, a Broadway play and three acclaimed films.

I actually have not read this book by Steinbeck, nor have I seen any of the plays or films.  In fact, I’ve never read anything by him that I can remember.  But I’m positive I am in the minority on this one.  Perhaps I should check this one out.  According to the library catalog record (click on title link above), it’s only a bit over a hundred pages long, which means I could finish it in an hour or two.  A likely candidate for a weekend read and my choice for this year’s Banned Book read. 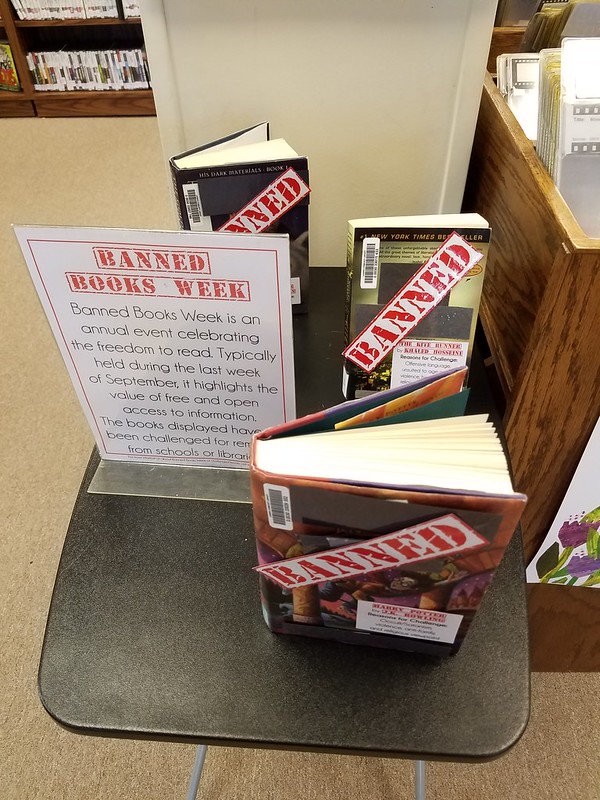 Even Harry Potter and the Hunger Games have been challenged for removal! And the real icing on the banned book cake: The Bible is a banned book too!

So I encourage you to investigate our display, check out one of these ‘banned books’ and RAFO†.

If you have any questions or would like further reading recommendations of banned and challenged books, please don’t hesitate to contact us by phone or by email.

† read and find out

One thought on “Banned Book Bonanza”