Absolute Magnitude: The brightness a star would have at a distance of ten parsecs (10 pc) or 32.6 ly.

To understand the relationship between apparent and absolute magnitude, we need to know how an object’s brightness changes with distance.  If we observe two identical stars, one of which is twice as far away as the other, how much dimmer will the more distant star be as seen from Earth?  Light quickly decreases in brightness as distance increases, adhering to the inverse-square law where apparent brightness decreases inversely with the square of the distance between the source and the observer.  Returning to our two identical stars, the more distant star’s brightness decreases to a quarter (one divided by two squared) of its closer twin. 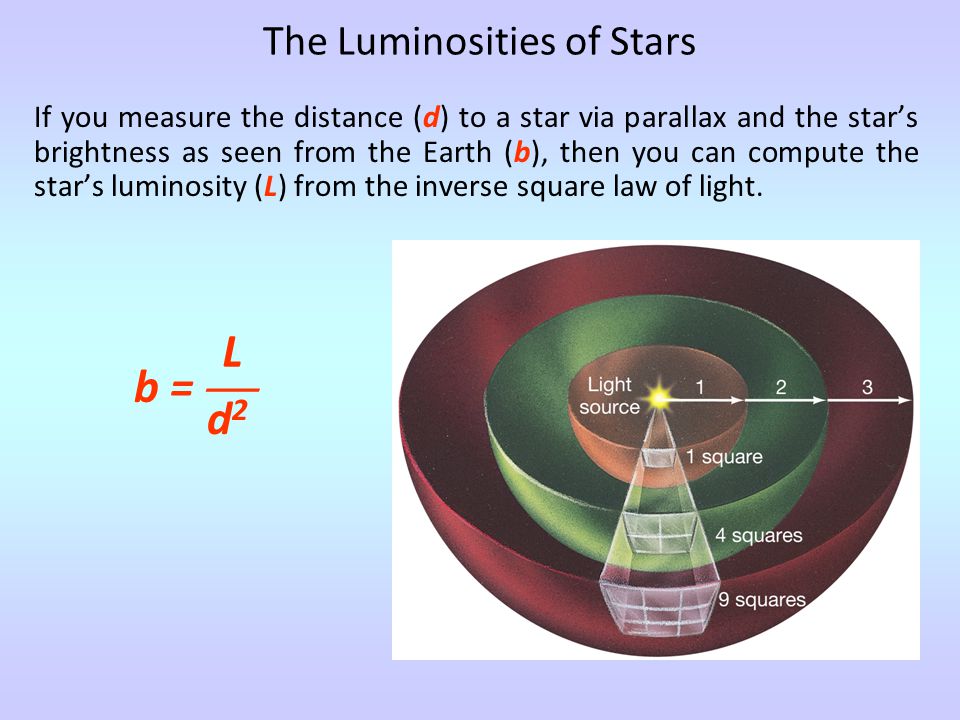 Parallax: When nearby objects appear to shift their position against a distant background as we move.  Stellar Parallax is the apparent motion of nearby stars among the background of more distant stars as a results of Earth’s orbit around the Sun.  By measuring the parallax angle and a bit of geometry, astronomers can determine the distances to nearby stars.

Luminosity: Total amount of electromagnetic power or the energy emitted each second.

Returning to my original discussion topic question, taking into consideration what I’ve learned this week, how could a closer star appear dimmer than one farther away?  Hardly seems possible, especially when taking into account how drastically light dissipates over distance.   But if the luminosity of the closer star is low, in other words, it’s energy output is wan or waning, then the farther star, having a higher luminosity, high enough to overcome the loss of light over the greater distance, then perhaps the closer star could appear dimmer to us.

In closing, I wanted to share a graphic that has stuck in my memory for several years now.  It’s easy to forget that the night sky, the celestial dome over our heads, is not just a bowl with stars studding the interior, all of equal distance to us.  That’s the trap the we were stuck in for centuries known as the geocentric model.  Instead, when we connect the dots between the brighter easily visible stars in the night sky, the lines are an illusion of two-dimensionality.   Below is a graphic illustrating the perception versus the reality in the Big Dipper asterism: