This week I’m tackling the subject of our Sun’s motion through the Milky Way Galaxy and approximately how long one orbit is.

The Milky Way Galaxy has two major spiral arms, named the Perseus Arm and the Scutum-Centaurus Arm.  There are also smaller less pronounced arms, including the Sagittarius Arm, the Norma Arm, The Local Arm (aka the Orion Spur) and the Outer Arm.  Our solar system resides in the Orion Spur (Local Arm), branching off from the larger Perseus Arm.  During the summer months in the northern hemisphere, we predominantly observe the Sagittarius Arm, including the galactic center, which appears as steam from the Tea Pot asterism in the constellation Sagittarius.  (Gaherty, 2016)  Over the winter, we’re looking away from the galactic center and through the Perseus Arm.  (Comins, 396)

But the Sun’s path around the Galaxy isn’t strictly speaking a rigid route.  Rather, the solar system experiences differential rotation.  For example, the Sun is like a car on a circular highway, with a fast and slow lane.  The fast lane, closest to the galactic center, is passing the Sun and from our vantage point appears to be moving in one direction.  The slow lane, farther from the galactic center than we are, is being overtaken by the Sun and appear to be moving in the opposite direction, similar to the retrograde motion of the planets Mars, Jupiter, etc.  (Comins, 401) 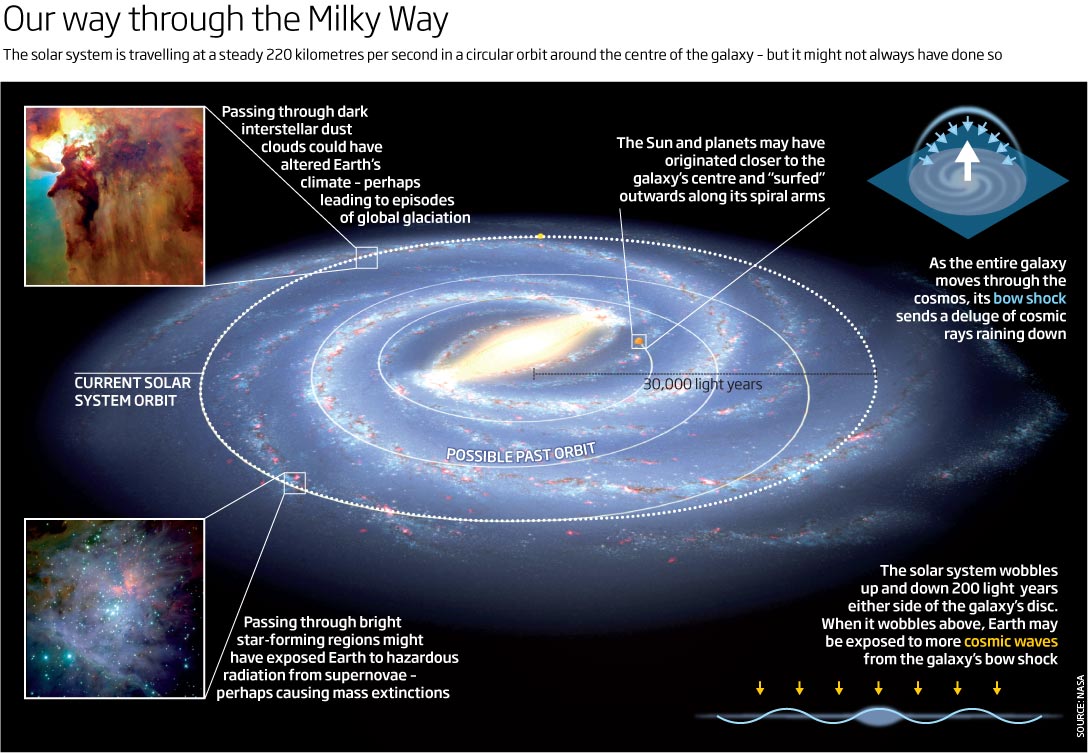 Solar system is moving at 878,000 kph (500,000 mph) around the center of the Milky Way Galaxy.   (Comins, 400). Knowing the Sun’s speed and distance from the galactic center (26,000 ly), astronomers can calculate the Sun’s orbital period.  We’re traveling at 878,000 kph and we take 230 million years to complete one trip around the Milky Way Galaxy.  The last time we (the solar system) passed our present position in the Galaxy, the early dinosaurs of the Triassic period roamed the Earth.  (Comins, 402) 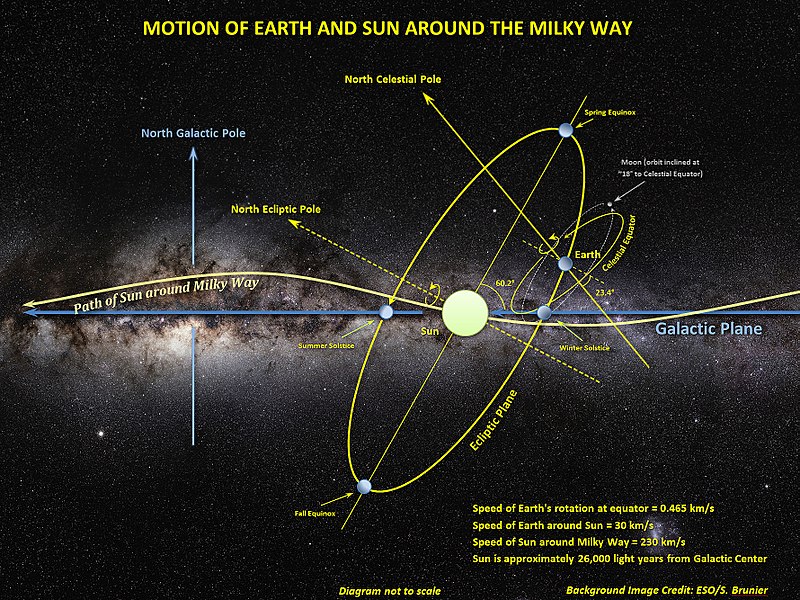 Bottom line: The planets in our solar system orbit (revolve) around the sun, and the sun orbits (revolves) around the center of the Milky Way galaxy. We take about 225-250 million years to revolve once around the galaxy’s center. This length of time is called a cosmic year. (“How long to orbit Milky Way’s center? | EarthSky.org,” 2016)

Considering the motion of the Earth, the solar system, and the galaxy, how fast am I moving while lying in bed asleep?

The Sun has made ten trips around the Milky Way and it’s a middle-aged star.  Barring any catastrophic mid-life crisis or second childhood tangents, the Sun should make another ten trips before reaching the ripe old age red giant stage of its stellar life.

Becker, K. (n.d.). Considering the motion of the Earth, the solar system, and the galaxy, how fast am I moving while lying in bed asleep? (Intermediate) – Curious About Astronomy? Ask an Astronomer. Retrieved from http://curious.astro.cornell.edu/physics/41-our-solar-system/the-earth/orbit/86-considering-the-motion-of-the-earth-the-solar-system-and-the-galaxy-how-fast-am-i-moving-while-lying-in-bed-asleep-intermediate

Byrd, D. (2014, May 20). Which spiral arm of the Milky Way contains our sun? | EarthSky.org. Retrieved from http://earthsky.org/space/does-our-sun-reside-in-a-spiral-arm-of-the-milky-way-galaxy