For such a small chapter, this week’s topic on Cosmology has some large and deep concepts.  I’m attempting to delve into “How did the period of inflation cause the universe to become homogeneous and isotropic?”

Big Bang ~ Universe began as an extraordinarily hot, dense primordial atom of energy and caused expansion, just like an explosion.  Before that moment, nothing existed, not even space and time.  Rather, the explosion created spacetime, which continues to expand.  (Comins, 446)

Inflationary Epoch ~ During this epoch, the universe became so large that today we can only see a tiny portion of it and that is limited by the speed of light.  The growth and size of the observable universe occurred in a very brief time.  (Comins, 451)

Cosmic microwave background (CMB) ~ If the universe began with a hot Big Bang, then calculations indicated the energy remnants should still fill all of space today. The entire universe’s temperature should be only a few kelvins above absolute zero.  This radiation’s blackbody spectrum peak should lie in the microwave section of the radio spectrum.  (Comins, 446)

Isotropy of CMB ~ The cosmic microwave background radiation is almost perfectly isotropic – the intensity is nearly the same in every observable direction.  Isotropy isn’t just limited to observed blackbody radiation, but is also found on a large scale when exploring the number of galaxies found in different directions.  (Comins, 448)

Homogeneity ~ The uniformity with distance (the numbers of galaxies stays roughly constant with respect to both distance and direction) of the universe is homogeneous. (Comins, 449)

Any viable theory of cosmology, including the Big Bang, must explain the isotropy and homogeneity of the universe.  Numerous refinements have been posited and as a result the theory now provides an accurate scenario for the evolution of universe from a tiny fraction of a second after it formed and onward to today.  (Comins, 449) 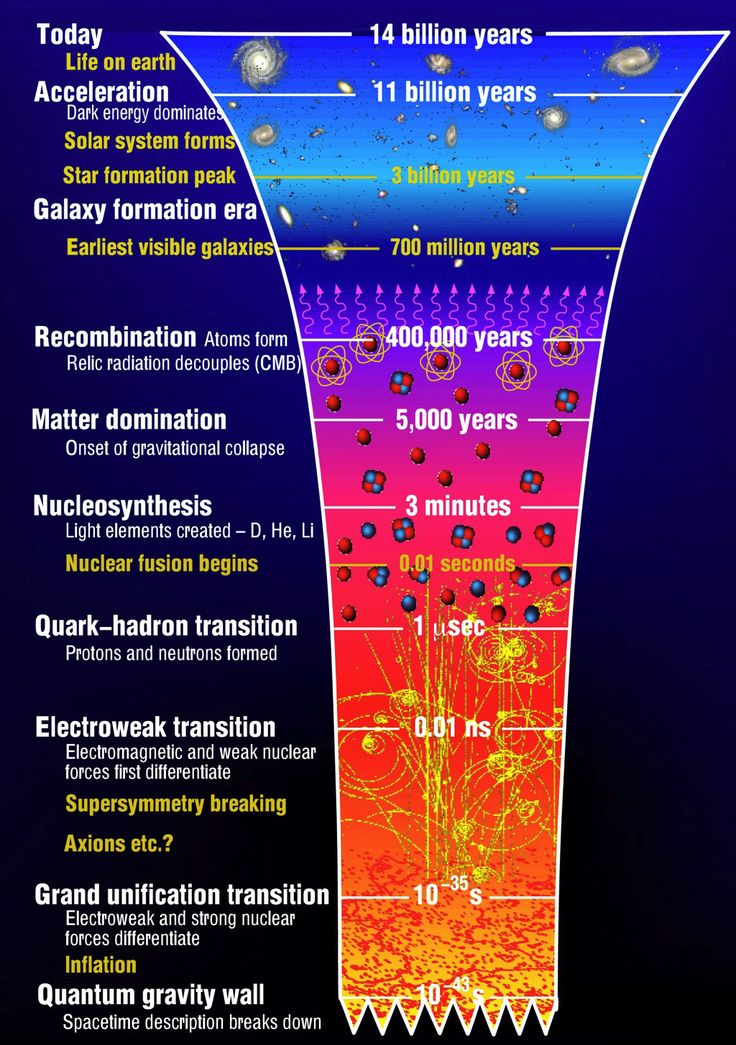 Homogeneity and Isotropy Resulted From Inflation

Entropy triumphs or rather chaos is more likely to happen than order.  Astronomers thus infer that the early universe’s matter and energy were distributed chaotically and expanded turbulently (similar to what happens on Earth during an explosion).  If inflation had not occurred, expansion would have continued at a constant rate and we would now be able to observe significantly different temperatures in different parts of the universe.  However, every region of the universe reveals a similar temperature to within a very tiny fraction of 1 K.  This situation is referred to as the isotropy problem or horizon problem.  Astronomers theorize that the universe’s inflation occurring very early smoothed out the universe we observe today. (Comins, 451)

We observe objects, like galaxies and galaxy clusters, at a distance of 13.8 billion light-years, just as they are forming.  As a result of inflation, these objects’ matter was once extremely close to us.  Before inflation, those same objects had the same temperature, pressure and density as objects found in our cosmic neighborhood.  After inflation, some of our neighbors became much more distant, but their matter and energy maintained the same properties.  Thus, the most distant reaches of the universe we can see are comprised of matter and energy with the same characteristics of matter and energy found in our corner of the universe.  This explains why the visible universe appears uniform, both homogeneous and iostropic. (Comins, 452)

All the light we cannot see has not reached us yet, but the light we can see from Earth is contained in an enormous sphere.  The edge of said sphere is called the cosmic light horizon.  We are unaware of objects on the other side of this boundary because the light has not reached Earth yet.  As time marches on, we will continue to observe and discover objects farther from us. (Comins, 452)

Mastin, L. (2009). Cosmic Inflation – The Big Bang and the Big Crunch – The Physics of the Universe. Retrieved from http://www.physicsoftheuniverse.com/topics_bigbang_inflation.html