My final astronomy discussion topic attempts to answer “Why are some wavelengths of radio emission better than others in searching for extraterrestrial civilizations?”

Radio waves can travel immense distances without being significantly altered by interstellar medium.  They penetrate dust and gas and are the logical choice for interstellar communication.  Astronomers have been listening for signs of extraterrestrial life using the radio spectrum since the 1950s and 60s – long before scientists had discovered the means of detecting exoplanets.  But the sheer number of both radio frequencies and directions to search proved daunting and raised question like “Which frequencies should be used to maximize the odds of detecting an alien signal?”

Some radio wavelengths travel farther without being absorbed by interstellar gas and dust.  Some don’t compete with the noise of other sources.  A range of relatively clear frequencies exists near the microwave emission lines of hydrogen (H) and the hydroxyl radical (OH).  (Comins, p. 475-76) 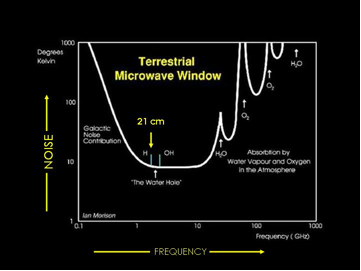 This microwave window has another interesting feature to recommend it as a place for interstellar communication: the “Water Hole.” Some atoms and molecules in space emit radio waves at particular frequencies. Hydrogen atoms emit at 1420 MHz (a wavelength of 21 cm). Hydroxyl molecules, composed of one atom of hydrogen and one atom of oxygen (OH), emit at four specific radio frequencies ranging from 1612 MHz to 1720 MHz. When a hydrogen atom combines with a hydroxyl molecule it forms a molecule of water, the most essential molecule for life as we know it. Thus, the range of frequencies from 1420 to 1720 MHz is called the Water Hole. (“SETI Observations | SETI Institute,” n.d.)

We’ve been sending signals into space for more than a century, starting with Marconi’s first radio transmission in 1895.  We’re generating a constantly expanding radiosphere of unintentional radio and television broadcasts currently about 120 light-years in diameter.  Astronomers and scientists have also intentionally broadcast messages, like the one in 1974 saying ‘hello’ and aimed at M13 (globular cluster in Hercules) from the Arecibo radio telescope.  (Comins, p. 478)

Pioneer 10 and 11 launched in 1972 and 73 carry plaques (see image below) and both Voyagers, launched in 1977, carry phonograph records encoded with human images and voices.

SETI searches at frequencies where radio waves pass most easily through interstellar medium.  No life detected outside Earth … yet.  Our everyday radio and television transmissions from Earth together with intentional broadcasts into space may be detected by other life-forms.

Other forms of communication outside of radio or television broadcasts are being considered in the search for alien civilizations, and could include neutrinos, artificially created gravity waves, searching for alien spacecraft, habitats or constructs like Dyson spheres.  (Dvorsky, 2014)

Regardless of how when or even if we ever make contact with extraterrestrial life, my hope is we will reach out in friendship, be received in kind and reach understanding and cooperation.