When it comes to Android apps that purport to provide me access to the digital resources of my local library, I’ve learned to not set the bar very high, if at all. All of the apps I’ve tried, and still struggle with, have slowly improved over the last couple of years, but whenever possible, I avoid using them for the same reason I only purchase audiobooks from Downpour: no proprietary software required and no DRM applied.

My ‘high bar’ for audiobook listening remains the Smart Audiobook Player – bar none (pun intended) – a popular choice for Android devices that comes with a good selection of features, such as variable playback speed, bookmarking, an audio equalizer, some basic collection management features, a sleep timer, auto-rewind, integration with Android Auto and control widgets for the notification tray and your home screen.

Until yesterday, I only had one other application installed on my smartphone that played audiobooks: Hoopla. I also have Overdrive installed on my tablet but I rarely use it for audiobooks. Yesterday, I installed Axis 360 for reasons I will explain shortly and it’s been nothing but a headache to operate, let alone actually listen to the audiobook I checked out when my hold became available. 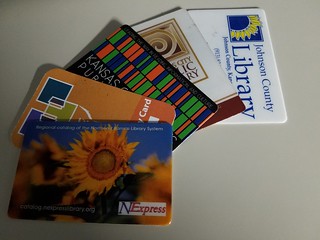 This time of year, I’m reading through as many of the Hugo Award finalists as I can squeeze in between when the finalists were announced (early February) to when voting closes (end of July). I’m in the final stretch now, and I must squeeze into my day every opportunity to read, including while commuting and during my lunch break. The Hugo voter packet has not yet been released (it’s now 2-3 weeks later than usual*) and I don’t fancy purchasing any or all of the editions of the Best Novel finalists; so, I take full advantage of all my library cards, including several requests for out-of-print interlibrary loans for the Retro Hugo Award finalists (works originally published in 1942).

* Correction: I should have checked my feeds before posting this. The Hugo Voter Packet was released today, three hours ago.

I had all but one Best Novel finalist lined up (i.e. placed on hold at one of the libraries shown above). None of my local libraries carried the ebook, eaudiobook or Audio CD of Provenance by Ann Leckie. I’d almost given up hope because Orbit, Leckie’s publisher, is the science fiction and fantasy imprint of Hatchette Book Group, which rarely agrees to provide the full ebook edition in the Hugo voting packet. I was either going to have to check out the print edition (not my favorite option), purchase the ebook (not entirely unlikely as I do love all of Leckie’s Ancillary books and already own them) or purchase the audiobook from Downpour. Surprisingly, about six or eight weeks ago, one of my local libraries purchased both the ebook and the eaudiobook and I immediately put myself on the hold list. After patiently waiting, my hold finally fulfilled late last week. Unfortunately, the audiobook can only be listened to with Baker & Taylor’s proprietary Axis 360 application. 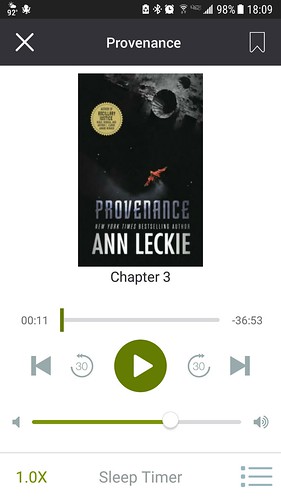 I resigned myself and reinforced my low expectations by reviewing all the most recent reviews of Axis 360 in the Google Play store. I installed the application with no issues on my Samsung Galaxy S7. I quickly configured the application with the appropriate library card and PIN number to gain access to my checkouts. I started listening to the Provenance audiobook before I went to bed last night to make sure that it played and that it downloaded to avoid unnecessary usage of mobile data.

Less than twenty-four hours later, I’m ready to uninstall this application and resign myself to reading the ebook (which also became available on my hold list at nearly the same time).

Here are my pros/cons from today’s experience:

I didn’t receive a phone call while commuting today, so I didn’t get to test whether or not the audiobook would have paused automatically until I finished the call and resumed automatically afterwards. I don’t have high hopes.

I will struggle through this one audiobook checkout only because the only other Best Novel finalist audiobook I have ready to go is Kim Stanley Robinson’s New York 2140, which is too long to start this week while I’m concurrently reading the over one-thousand page print edition of Wright’s Islandia. As soon as I finish Provenance, I will probably uninstall the Axis 360 application from my smartphone.

In short, I cannot recommend this application to anyone. Both Hoopla (which does integrate with Android Auto) and Overdrive perform better than Axis 360 with respect to listening to audiobooks while driving.