I once aspired to be a poet. During my teens, I filled journals and notebooks with clumsy rhymes, attempting to paint with words and emotions.  But by twenty, all my misty dreams of meter and rhyme faded before the rush of life’s dawn.  I can’t remember the last time I wrote something creative.  Even this blog is just a non-fiction autobiographical day-in-the-life outpouring, for the most part. 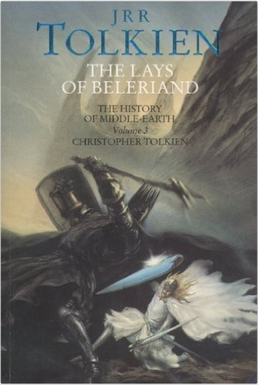 My poetic wellspring may have run dry or perhaps my muse is MIA; regardless, I still appreciate a well written verse or stanza.  I was reminded of this when I joined the local chapter of the Tolkien Society.  We have read Unfinished Tales in the last year as well as The Story of Kullervo and The Children of Húrin, which I listened to the audiobook narrated by the late Christopher Lee (highly recommended).  I scoured local second-hand book stores and found paperback editions for the History of Middle-Earth (it is not currently available in ebook editions) including The Lays of Beleriand.   I listened to podcasts and learned about alliterative verse, which is best appreciated when read aloud (as is true of most poetry).

Here is an example from The Lays of Belerieand, taken from the Lay of the Children of Húrin: 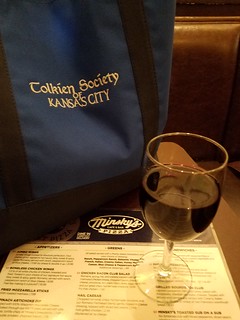 Fast forward a few months to now, or rather last night, when I attended the regular monthly gathering of the Tolkien Society of Kansas City.  We met for a couple of pints, pizza and to discuss the first four chapters of The Return of the Shadow (RotS) and The Fellowship of the Ring (FotR), which we’re reading concurrently (see my previous post for more details). We decided to skip our meeting for December and reconvene in late January with a goal to finish the Phase One section of RotS and Book One of FotR.

While driving home, I realized it won’t take me long to finish that reading assignment, but if I devote part of December to completing it, I would probably fail to achieve my self-imposed goal of reading ninety-nine books this year.   Despite an insane work schedule and project deadlines, I’ve managed to read eighty-three (83) books in eleven (11) months.  Starting today, I have thirty-one (31) days to read a minimum of seventeen (17) books (but one more would give me an even hundred so I’m really shooting for eighteen (18) books) to reach that goal.  I need to read approximately four to five books per week for the next four weeks. 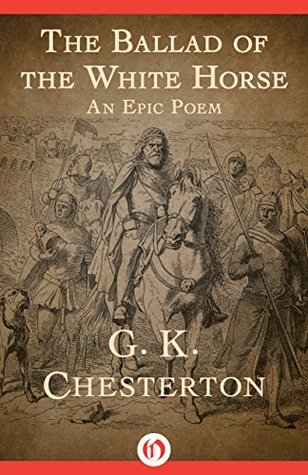 Consequently, December is the month I troll through my collection of ebooks (over three thousand and growing) for novelettes or novellas that I picked up on sale or sometimes free, as was the case with The Ballad of the White Horse: An Epic Poem by G.K. Chesterton.

In the dark times before a unified England, warring tribes roved and sparred for territory across the British Isles. The Ballad of the White Horse records the deeds and military accomplishments of Alfred the Great as he defeats the invading Danes at the Battle of Ethandun. Published in 1911, this poem follows the battle—from the gathering of the chiefs to the last war cry—with a care to rhythm, sound, and language that makes it a magnificent work of art as well as a vital piece of English history.

A significant influence† on the structure of Tolkien’s The Lord of the Rings, The Ballad of the White Horse transforms the thrilling exploits of a courageous leader into an inspirational Christian allegory.

I started reading The Ballad of the White Horse (BotWH) last night and only made it to the first excerpt below (from the Dedication), before I started nodding off.  I did remember to highlight the stanza before heading to bed.  When I awoke this morning, I reread from the beginning of the Dedication and finished the first two books:  Book I. The Vision of the King and Book II. The Gathering of the Chiefs.

The following are the highlights I marked in my ebook edition:

“Up through an empty house of stars,
Being what heart you are,
Up the inhuman steeps of space
As on a staircase go in grace,
Carrying the firelight on your face
Beyond the loneliest star.”

“For the end of the world was long ago,
When the ends of the world waxed free,
When Rome was sunk in a waste of slaves,
And the sun drowned in the sea.”

“Our towns were shaken of tall kings
With scarlet beards like blood:
The world turned empty where they trod,
They took the kindly cross of God
And cut it up for wood.”

“The wise men know all evil things
Under the twisted trees,
Where the perverse in pleasure pine
And men are weary of green wine
And sick of crimson seas.”

“Long looked the Roman on the land;
The trees as golden crowns
Blazed, drenched with dawn and dew-empearled
While faintlier coloured, freshlier curled,
The clouds from underneath the world
Stood up over the downs.”

“For the great Gaels of Ireland
Are the men that God made mad,
For all their wars are merry,
And all their songs are sad.”

I should finish this ballad today.  Other novelettes/novellas I have queued up include:

I almost forgot.  One other interesting poetry tangent from this past week.

While reading FotR, Book One, Chapter Three, as the three hobbits (Frodo, Sam and Pippin) are walking the lanes of the Water-valley, the sing what appears to be a fun, light song.  The fourth stanza, however, completely caught me by surprise, specifically the third line:

Home is behind, the world ahead,
And there are many paths to tread
Through shadows to the edge of night,
Until the stars are all alight.
Then world behind and home ahead,
We’ll wander back to home and bed.
Mist and twilight, cloud and shade,
Away shall fade! Away shall fade!

My mind immediately started an ear-worm of Billy Boyd singing “… to the edge of night … ” which made me stop dead in my reading tracks.  I closed my eyes and pictured Denethor eating his lunch while his son Faramir rode against the innumerable invading host from Mordor while Pippin mournfully sings the following:

The Steward of Gondor
The Edge of Night
Music by Howard Shore
Melody by Billy Boyd
Lyrics by J.R.R. Tolkien
Adapted by Phillipa Boyens

I was momentarily confused since Jackson’s movies supplanted and morphed the tone of Tolkien’s original verse, moving it from Book One to Book Five and from joyful to mournful.  And when compared to BotWH, which I’ve been reading this morning, it’s almost completely opposite from the last two Chesterton lines I quoted above concerning the Irish:

For all their wars are merry,
And all their songs are sad.

Then world behind and home ahead,
We’ll wander back to home and bed.

But I’ll leave you with a bit from FotR that I always carry in my heart from Book One Chapter Two: The Shadow of the Past:

“All we have to decide is what to do with the time that is given us.”

And my time in December will be spent reading epic poems and shorter books as I march toward my goal.

† Christopher Clausen has argued that The Ballad of the White Horse was a significant influence on J. R. R. Tolkien‘s The Lord of the Rings fantasy novel.[2] He argues that the basic structure and themes of the Ballad were borrowed and incorporated into the Lord of the Rings.

Robert E. Howard, the American author, poet, and widely known pulp magazine “fictioneer”, was much impressed by Chesterton’s The Ballad of the White Horse. In a letter to his friend Tevis Clyde Smith, dated 6 August 1926 (when Howard was 20), he writes: “There is great poetry being written now. G.K. Chesterton, for instance.” In another letter to Smith c. September 1927, after a trip to San Antonio from his home in tiny Cross Plains, TX, he writes: “Several books I purchased on my trip, among them G. K. Chesterton’s The Ballad of the White Horse. Ever read it? It’s great. Listen:…” which he follows by quoting several stanzas. Howard uses select excerpts from Chesterton’s poem to serve as epigraphs for chapter headings in some of his stories. He frequently numbers Chesterton among his favourite poets.[3]

Influence on Other Works section of Wikipedia article

One thought on “Riding a White Horse Ballad”