“If we ask why an omnipotent and benevolent deity would put our hero through so much suffering in order to destroy the One Ring, we are asking the wrong question.  For the mere destruction of evil was never on the agenda at all.  Little children, in their frightening innocence, believe the world would be a better place if only we would kill all the bad people.  Those adults who love them understand that the moral realm is more difficult than that, and that the evil we must fear the most resides within ourselves.”

” . . . the true purpose of the Ring-quest: not to destroy the source of power, but to test all of creation and decide whether it is worthy of continuance.  Frodo’s quest, though he doesn’t know it, is a scouring of Middle-earth.”

“. . . Tolkien was writing about the world as he understood it, and in that world he had learned certain lessons:  That pity is sometimes better than justice.  That the best leaders are often filled with doubt. Most importantly, that life has consequences.”

“From 1983 through 1996, Tolkien fans were given a new collection of Middle-earth writings nearly every year, the sum total being twelve large volumes of Christopher Tolkien’s series on Middle-earth.  The resulting fourteen volumes — for one must include Unfinished Tales and The Silmarillion as part of the whole History — span nearly sixty years of Tolkien’s creative work on his invented world.  . . . these fourteen posthumously published volumes contain roughly four times the amount of writing that is to be found in The Hobbit and The Lord of the Rings.  . . . nevertheless, the simple amount of material on Middle-Earth that Tolkien produced in his lifetimes is staggering.”

“Just at the time when the proponents of realism had begun to dominate the literary world, along came Tolkien and The Lord of the Rings, his refashioning of the old genre.  And as regards tone, Tolkien’s writings are markedly different from the predominantly ironic trend in modern works.  Tolkien was not incapable of irony, but he did not write in a largely ironic tone.  Thus Tolkien’s work represents much that the modernists (and after them, the postmodernists) simply detest — and what is perhaps to them the worst offense of all, Tolkien’s works have become popular.” 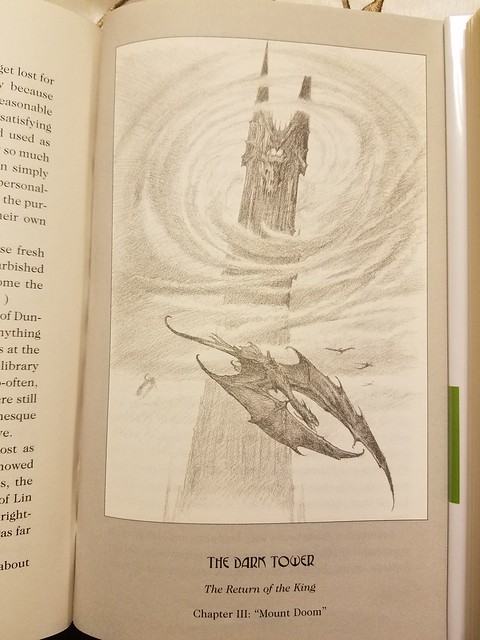 Two very scholarly essays which were interesting but not necessarily enjoyable to read where Le Guin’s “Rhythmic Pattern in the Lord of the Rings” (where I increased my poetic vocabulary) and Card’s “How Tolkien Means” (where I learned why I prefer the complexities of escapism to the over-simplication espoused by modernism/postmodernism).

“Great novels offer us not only a series of events, but a place, a landscape of the imagination that we can inhabit and to which we can return. . . . Tolkien constructs an inexhaustibly complex, stable rhythmic patter in imagined space and time.  The tremendous landscape of Middle-earth, the psychological and moral universe of The Lord of the Rings, is built up by repetition, semirepetition, suggestion, foreshadowing, recollection, echo, and reversal.  Through it the story goes forward at its steady, human gait. There, and back again.”

“So there you have it:  ‘serious’ literature is a complicated business, requiring experts to extract meanings, while ‘escapist’ literature is so simple it needs no mediation.

“In my reading of the story . . . Sam was the great hero; and The Lord of the Rings had a perfect ending because he was, finally, the only ringbearer who had no regrets.  He had borne the ring but had done nothing wrong with it; and despite temptation, he had surrendered it more freely than anyone who had ever worn it.  So it was fitting that he received, not the contemplative life of Frodo’s apotheosis, but rather the idea of heaven that I had grown up with in my definitely non-Catholic religion: to live in a garden made by his own hands, surrounded by his family, and able to watch and help his family and his garden improve and increase.”

“There is a man’s whole soul in the pages of this tale, a man’s whole life, each stage of it, represented in the elements of its creation. The great storytellers are the ones whose characters become as real in our memories as our friends and families. As ourselves.” 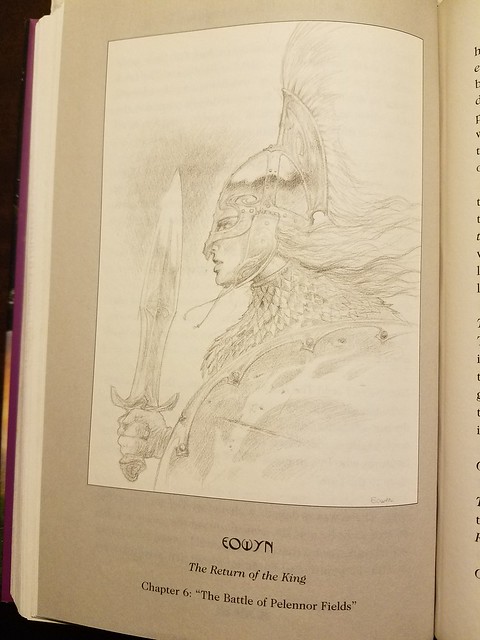 Diane Duane, Robin Hobb and Terri Windling essays provided a point-of-view I could completely relate to.  Duane’s “The Longest Sunday” completes closely with Swanwick’s essay for best written and high on my re-read factor.  Terri’s essay, “On Tolkien and Fairy-Stories” was heart breaking in a very personal sense.  I could not quote that essay below out of context.  Rather, I encourage you to read it in it’s entirety.

“I had three distinct sensations at the end of The Lord of the Rings. One was the simple, unbelievable void of ‘It’s over.  There’s no more of it to read.’ The second was, ‘And I’ve never encountered anything like this.  I’ll never find anything this good again.’ The third was perhaps the most alarming: ‘In all my life, I will never write anything as good as this.  He’s done it; he’s achieved it. Is there any point in my trying?'”

“For years afterward, other fantasy books, no matter how profound, would seem shallow in comparison. I would hunger for the richness of prose that took its time to tell the story, not as efficiently as possible, but as intricately as the tale deserved.”

“And after finishing it that night, it took me some time to get to sleep — I was suffering from a sort of jet lag of the soul. . . . having for the first time experienced a world so deeply imagined, I was also having to deal with an odd sense that it had been there for a long, long time . . . and also that, even after the book was closed, that world still existed somewhere else. That it would be there again when I opened the book once more seemed almost an accident, as a room you’ve left will still be there . . . when you open its door again.”

“I was up on Mt. Rigi, in the middle of Switzerland. It was spring. I was out for a walk one morning . . . There are no roads up there, just walking paths and meadows . . . I looked down into the grass and saw there something I hadn’t been expecting: little, white six-petalled flowers, about an inch across.  And a voice, Sam’s voice, said in my head, ‘Do you remember the elanor, the sun-star, that we saw in the grass in Lórien?’

“I got down to have a closer look.  The little flowers turned out to be Crocus alpinus, the alpine crocus.  … throws a ‘sport’ version in about one bulb in every twelve: a six-petalled version with little tips of pale gold at the end of the petals. . . . They are (I think) elanor: for Tolkien holidayed in these mountains and would certainly have seen them.” 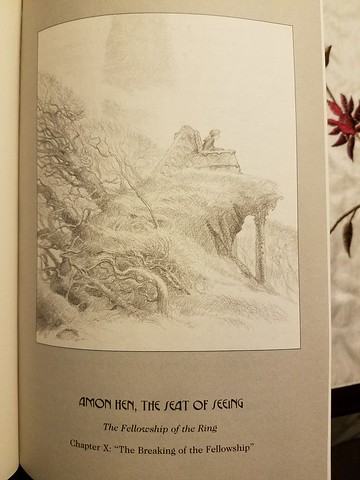 I wrote yesterday about how many of the authors in this Meditation anthology related reading The Hobbit and The Lord of the Rings at a seminal age, the majority confessing to their early teens. I had a very similar experience on the cusp of my teens, one that corresponds unsurprisingly to most of the authors’ memories.

Some of the essays in this collection fell flat for me, especially for authors I had never read or whom I had read, but never returned for more.  Those, thankfully, were few in number.  The majority of these essays, of course, are ‘preaching to the choir’ of us who are already fully immersed in Tolkien’s Legendarium.  A couple of them (Swanwick’s and Duane’s essays in particular) might induce someone unfamiliar with Middle-earth (from another planet perhaps?) to pick up The Lord of the Rings and begin their journey there and back again.

It’s been nearly twenty years since this collection was published. It exists prior to the release of Peter Jackson’s films and Prior to the publication of The Children of Húrin, Beren and Lúthien and The Fall of Gondolin.  We’ve celebrated the 80th anniversary of the release of The Hobbit and this year the Tolkien Society celebrates it’s 50th anniversary.

In her Preface “The Beat Goes On,” editor Karen Haber pointed out that ‘regardless of the particular writer/reader and his or her response, Tolkien touched them all, changed them and changed fantasy literature . . . the rhythm to which an entire literary genre, its readers and practitioners, has resonated for over thirty years.  Come and join the dance.’