Series that were not available for streaming, I added to my DVD queue, starting with The Americans, and also adding Horatio Hornblower, Human Target, Missing, Into the West and Bleakhouse.  I also added a half dozen movies to my queue, but left The Americans at the top.  I sent back the Manhattan DVDs expecting to receive The Americans in a couple of days.  But imagine my surprise when Horatio Hornblower showed up first as well as a movie at the bottom of my queue.  I went back to check my queue to discover that The Americans had a ‘very long wait’ which I’d never seen before.  I’ve seen ‘short wait’ and even ‘long wait’ but never ‘very long wait.’

Exasperated, I checked my local libraries and found I could get the DVDs (not the Blu-Rays I could have gotten from NetFlix) from my local regional library.  I placed the first series DVDs on hold and waited for them to arrive.

Meanwhile we watched the Horatio Hornblower DVDs we’d received.  The video quality is atrocious but it was 1998 and 1999, although A&E re-released them within the last decade and you’d think they would have massaged the video quality somewhat. 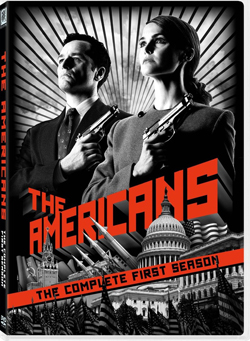 So when I finally got my hands on The Americans DVDs I kept my fingers crossed when I inserted the first DVD.  I was pleasantly surprised that the video quality was better than what I get most days from Dish Network’s “HD” channels but not quite as good as a Blu-Ray.  Very acceptable viewing experience even for a DVD.

The only drawback to checking out the DVDs from the library is having to deal with the due dates.  The reason I joined Netflix years ago is so I never had to worry about a due date again.  Even though I received the DVDs quickly from my local library, I can only keep them for a week before having to renew them.  Which meant my husband and I had to carve out extra time over the past three weeks (I was allowed two renewals of the original one week checkout period).  We squeezed in all thirteen episodes, despite my going AWOL for five straight days to attend WorldCon.

The Americans is the second television show I’ve watched this summer set in the early 1980s, a decade I tend to prefer not to think about.  The highlights of the 80s for me were meeting my husband and the birth of my children.  Aside from that, the pop culture, music and movies of that error are most of the time best left forgotten or ignored.

But in both cases, The Americans and Stranger Things don’t over emphasize the decade.  It’s just the background framework for the drama occurring center stage.  And what works the best in both series is the lack of instant communications.  We take it for granted, now, in the second decade of the 21st century, that we have instant access in the palm of our hands to global information and the ability to contact nearly anyone immediately.  In the early 80s, most of those things were barely a blip on the cold war radar screen.  The tension and drama that you can build because of a lack of communication or miscommunication can be heart pounding.

Overall, I’d give The Americans a 3.5 stars out of five.  Good, but not great.  Definitely kept our interest but we’ll probably take a break and return to the warmer war of the early 19th century and Horatio Hornblower (for at least the two DVDs I have from Netflix).

No late fee for me either.  I had two days to spare before I would have accrued a fine on The Americans first season DVDs.

One thought on “Stranger Things than the Americans”