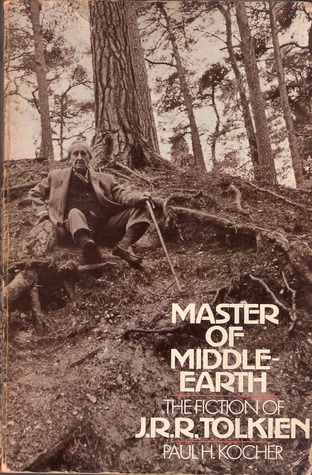 I read the first two chapters between sessions at MiddleMoot 2019. The first chapter asked the question “Middle-earth: An Imaginary World?” while the second chapter devoted itself to The Hobbit. I had to keep reminding myself that Kocher did not have access, in 1972 (the year before Tolkien died), the published Silmarillion, nor to any of the other ‘unfinished’ work later published by Christopher Tolkien, including the entire History of Middle-Earth series that took nearly twenty years to complete. Despite looking back from nearly five decades in the future, I can appreciate why Professor Kocher was awarded the Mythopoeic Scholarship Award (for Inkling Studies) in 1973.

I took a break from this book to catch up on my monthly reading for various book clubs, including the Tolkien Society of Kansas City’s current simultaneous re-read of The Two Towers with The War of the Ring. Two weeks after MiddleMoot, I found myself traveling, again, this time by plane to see my daughter’s debut as La Zia Principessa in Suor Angelica. Master of Middle-Earth I added at the last minute to my laptop backpack next to my iPad. I have thousands of ebooks to read, but I preferred reading, with pen in hand. By the time I landed back in Kansas City, where it was colder and wetter than the Seattle I depart from that morning, I had completed the next four chapters.

Two of those four I had to read twice, and one of them three times. They were that deep. Chapter III “Cosmic Order” kept me up at night, not because it terrified me, but because it put my brain into philosophical and theological overload. Chapter IV “Sauron and the Nature of Evil” continued where Cosmic Order left off. Both chapters have something underlined or marginalia notes on every page.

Tolkien is facing a joint literary-philosophical imperative. Literally, he wants to keep an atmosphere of wonder at the mysterious hand which is guiding events, . . . Philosophically, if the guiding hand is really to guide effectively, it must have power to control events, yet not so much as to take away from the people acting them out the capacity for moral choice. The latter, being fundamental to Tolkien’s conception of main (and other rational beings), must be preserved at all costs.

Sauron is Morgoth’s servant, but whose emissary is Morgoth? In one sense, nobody’s. . . . In another sense, his master can only be the One, who, while creating evil, permits it to exist and uses it in ruling his world — who, in truth, needs evil in order to bring on times of peril that test his creatures to the uttermost, morally and physically.

Over and over, Tolkien’s own words connect Sauron and his servants with a nothingness that is the philosophical opposite of Being. . . .That word nothing is a repeated knell for the passing of the lords of wickedness in The Lord of the Rings. Tolkien is careful to never say anything explicit about the nothingness to which they go, doubly careful never to call it hell, but it shares with hell the distinguishing feature of total estrangement from ultimate Being.

Chapter V “The Free Peoples” further explores the free will of elves, dwarves, ents and men. “Orcs, trolls, dragons … do not qualify because they are not free any longer.” (Kocher, 1972, p. 83). The chapter is subdivided into five parts for each race (except ents and adding hobbits).

Chapter VI “Aragorn” was the chapter I most wanted to read, since it was quoted several times in the Prancing Pony Podcost episodes dealing with Strider meeting the four hobbits at Bree (not-so-ironically at the Prancing Pony), the encounter between Frodo and the Witch-king at Weathertop and the ensuing flight to Rivendell. I followed along via my Twitter feed for most of October since WeatherTop occurs on October 6th and they arrive at Rivendell on October 25th. My take away from this chapter involved the realization that Elrond nearly matched Thingol for hutzpah, demanding a nearly impossible task be completed by Aragorn (some could say Beren reborn) before he would allow his daughter Arwen (also thought to be Luthien reborn). By Elrond’s command, Aragorn can’t marry Arwen until he regains his throne. Kocher also provides some insight into common misconceptions about the Eowyn-Aragorn one-sided love story subplot.

All but two of the above I’ve read and one of those I wasn’t aware of and didn’t own: Imram. I own an ebook edition of The Lay of Aotrou and Itroun but have not yet read it. In searching the ISFDB web site, I found that the poem Imram was included in Sauron Defeated, a volume of The History of Middle-Earth that I neglected to purchase because I assumed my boxed set of The History of the Lord of the Rings included it. To my consternation, I discovered this morning that boxed set lacks that volume. So I ordered it, immediately. I also purchased a set of Tolkien Journals from the Mythopoeic Society, many articles of which are referenced in the Notes for Master of Middle-Earth.

I plan to keep my marked-up copy of The Master of Middle Earth in my Tolkien library. I found it a valuable and insightful read. I am amazed at how much Professor Kocher was able to glean from what little had been published by Tolkien and about him in 1972. I recommend this book to anyone interested in delving more deeply into Tolkien’s writing, mythology, philosophy, etc.

One thought on “Book Review: Master of Middle-Earth”