When my daughter came to visit over the Christmas and New Year holidays, I made several trips to Trader Joe’s to purchase food she could eat without having an adverse reaction (she’s allergic to corn). While I was there I bought a box of peanut butter dog treats for Lexy. By the middle of January, we’d given Lexy all the treats from that box. I decided that since I’ve been making her dog food for a couple of months now, I might as well make her treats. That way, I control the ingredients and it’s also fun.

I searched for a peanut butter dog biscuit recipe and found several but one in particular caught my eye – a peanut butter pumpkin recipe. I was intrigued because our vet had us give Porthos pumpkin with his food whenever he had diarrhea. Apparently, pumpkin and chicken are easy for them to digest so that’s what Porthos ate for a couple of weeks last year until his tummy settled down.

I reviewed a half dozen recipes, most of which were just three simple ingredients – oats, pumpkin and peanut butter. Among the other items purchased at Trader Joe’s, I found myself with a couple of cans of organic pumpkin. So I added oats and peanut butter to my grocery list and came home with enough to make a large batch of this recipe I found among my dog treat search results: https://www.rachaelrayshow.com/recipes/peanut-butter-dog-treats-with-pumpkin-susan-holmes-mckagan

Please be VERY CAREFUL which peanut butter you give your dog – it must NOT contain the artificial sweetener xylitol. Most Natural peanut butters are xylitol free but double-check the ingredients to be safe.

END_OF_DOCUMENT_TOKEN_TO_BE_REPLACED

Porthos ran off to heaven a week ago on October 10, 2019.  Of all the Rottweilers we’ve rescued, Porthos was the first to succumb to the common ailment of bone cancer.  Everyday, I come home from work and I miss his whine of excitement. I miss his laps around the kitchen, dining room and great room. I miss evening walks with him. I miss cuddling with him before falling to sleep. I keep telling myself he’s in a better place and that he’s no longer in pain or suffering.

You will be sorely missed, Porthos. We love you!

Terry and I have finished two of three DVDs for the first season of Human Target.  I was hooked after the first episode, and not just because Christopher Chance’s pet was a Rottweiler named Carmine.  This show packs a lot of punches into a scant hour of programming and each episode is something completely different.  It’s fun to watch and even has me looking for the original graphic novels to read, but libraries are totally not up to speed in that area.  END_OF_DOCUMENT_TOKEN_TO_BE_REPLACED

So my dad calls me on my cell phone this morning, soon after I arrived at work.  He called to wish me well on the last day of my 50th year.

(Can you hear the sarcasm dripping from my lips?)

In other news, welcome to October!

Three years ago today, Terry and I rescued Lexy from a shelter in Parsons, Kansas.

She’s ready for her closeup now: 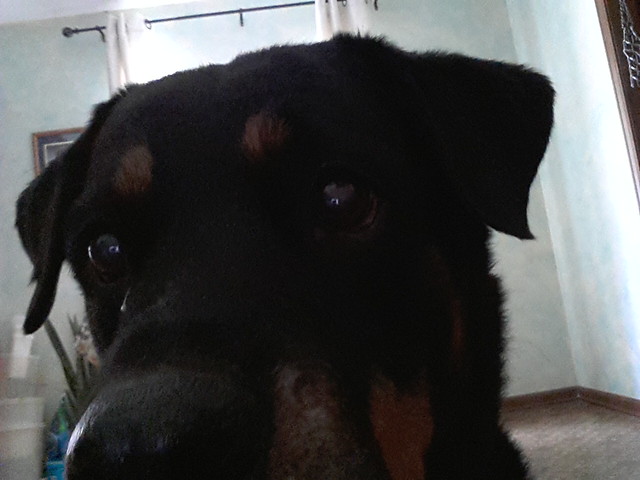 She’s a little greyer on her muzzle, but she still bullies Porthos (who outweights her by almost 20 pounds) and keeps him in line.

We’re so happy she’s still with us and had a clean bill of health from the vet just last week.

Great blog posting over at Rottweiler Life: “13 Reasons Not to Get a Rottweiler”

Hope that put a smile on your face this fine Friday.

Yesterday marked the four-month anniversary of our adoption of Porthos.  We survived the winter with a rambunctious adolescent Rottweiler.  Our house and specifically the trash can fared slightly worse.  He’s gradually adapting to confinement in the backyard when we leave to watch a movie or go grocery shopping, but he does not like to be crated when the weather is bad.  It’s sad that Terry and I, empty nesters, have to ‘babysit’ our dog and can’t trust him to behave himself when we leave the house.

We took him to the dog park for the first time on Sunday the 22nd.  For this first visit, I kept him close to me with the leash at the ready.  If Porthos decides to take off after another dog or person, there’s no way I could catch him.  He’s very agile and very fast, with powerful almost instant acceleration.  I got him to run through the tube at the park a couple of times and pose for a photo: 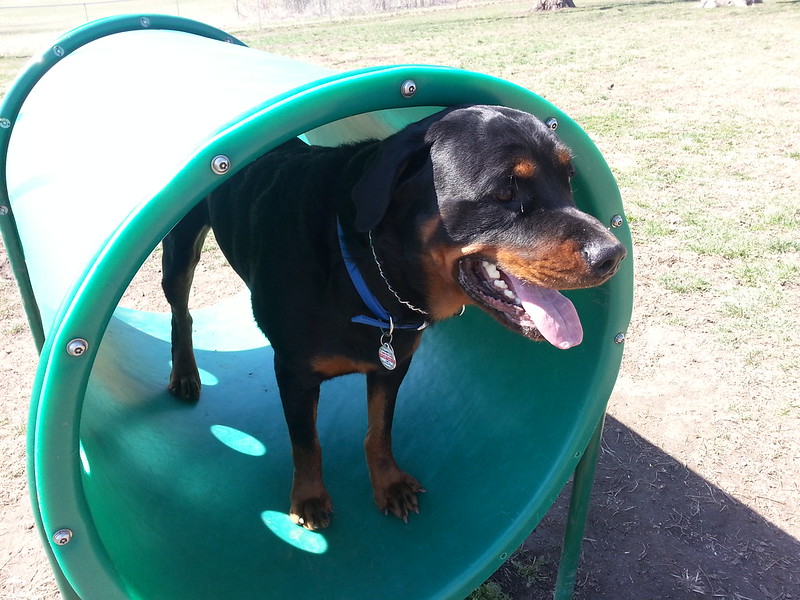 Once Spring arrived, I started walking each dog every other evening. Porthos is a joy to walk and I get good exercise trying to keep up with him. Lexy takes her time and needs to be coaxed to walk farther than a couple of blocks from home. I haven’t been brave enough to walk both of them at the same time. Maybe in a month or so.

END_OF_DOCUMENT_TOKEN_TO_BE_REPLACED

Judy: A Dog in a Million by Damien Lewis

British bestselling author Damien Lewis is an award-winning journalist who has spent twenty years reporting from war, disaster, and conflict zones. Now Lewis brings his first-rate narrative skills to bear on the inspiriting tale of Judy–an English pointer who perhaps was the only canine prisoner of war.

After being bombed and shipwrecked repeatedly while serving for several wild and war-torn years as a mascot of the World War II Royal Navy Yangtze river gunboats the Gnat and the Grasshopper, Judy ended up in Japanese prisoner of war camps in North Sumatra. Along with locals as slave labor, the American, Australian, and British POWs were forced to build a 1,200-mile single-track railroad through the most horrifying jungles and treacherous mountain passes. Like the one immortalized in the film The Bridge on the River Kwai, this was the other death-railroad building project where POWs slaved under subhuman conditions.

In the midst of this living hell was a beautiful and regal-looking liver and white English pointer named Judy. Whether she was scavenging food to help feed the starving inmates of a hellish Japanese POW camp, or by her presence alone bringing inspiration and hope to men, she was cherished and adored by the Allied servicemen who fought to survive alongside her.

Judy’s uncanny ability to sense danger, matched with her quick thinking and impossible daring saved countless lives. More than a close companion she shared in both the men’s tragedies and joys. It was in recognition of the extraordinary friendship and protection she offered amidst the unforgiving and savage environment of a Japanese prison camp in Indonesia that she gained her formal status as a POW. From the author of The Dog Who Could Fly and the co-author of Sergeant Rex and It’s All About Treo comes one of the most heartwarming and inspiring tales you will ever read.

Reminded me quite a bit of Unbroken: A World War II Story of Survival, Resilience, and Redemption, but not as well written.

I love a good dog story, but Judy became a minor player during most of this book.  END_OF_DOCUMENT_TOKEN_TO_BE_REPLACED

Rest in peace buddy and give Roxy our love.